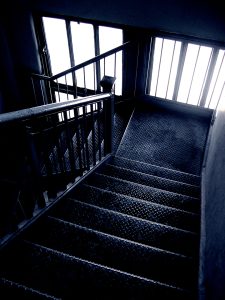 After an afternoon of viewing several art galleries I felt visually stimulated and energized to create some new images of my own. Upon leaving the last gallery I decided to not take the elevator but to take the stairs instead. This seemingly little decision was fortuitous as I soon found out. The light in the stairwell was dramatic in the way it blasted through the windows, lighting the dark painted metal stair steps. The paint had been worn off the treads by years of usage and revealed a graphic pattern. The light fall off as the stairs descended added a bit of mystery for me. Being pleased with the captures only a bit of contrast, a slight crop and cooling of the color was changed from the original image.

You sure captured that cold, hard, “steely” feel of the stairs.