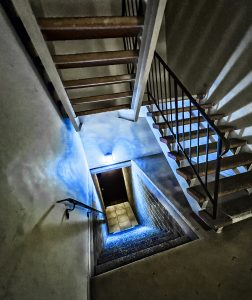 In my early 20’s I discovered the work of M.C. Escher. As someone who had considered becoming an architect, prior to discovering photography, I was fascinated by his creations. Escher’s love for “unusual, perspective, and multiple points of view” led him to study patterns found in nature, mosaics in Spain, and the play of light and shadow in a manner no one prior to him had considered. In my late teens, I had been immersed for a time in the world of psychedelics, LSD in particular. I actually met Timothy Leary at an LA party, in of course, Laurel Canyon. And yes, we were high. When I ‘took the stairs’ this morning (something I’ve been avoiding in my recovery from knee surgery), as I approached the top to exit, I looked back and saw what you see here. I immediately recognized the ‘Escher-esque’ feel created by the structures and their shadows. Is that element at the top a ladder? Or is it the stairs coming down from the floor above? Does the door below exist underground, or merely one floor down? The colors you see were in fact there, as were the stains on the walls. I chose to ‘draw them out’ and bring Mr’ Leary’s contribution to the 20th Century to the Escher party. Turn On and Drop Out!