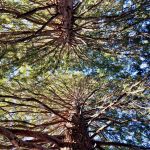 These two mammoth sequoias are part of a dispute in our Eastmoreland neighborhood in Portland, about a mile from our house. The usual controversy here, developers want to cut them down and environmentalists want to preserve them. They are truly magnificent to stand under and appreciate their age, beauty and mass. My photograph, on its own, is too busy for my eye to have much merit, but in this context, it has found an appropriate home. 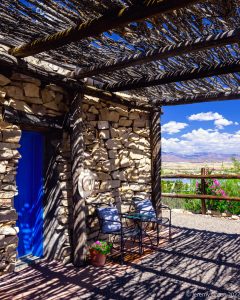 Necessity is the mother of invention, but it can also be the seed of genius. In the Big Bend area of southwest Texas, providing shade is an art form. This is my spot all this week. This kind of broken shade, made by laying readily available ocotillo across overhead beams, is perfect in that it blends hard sun with coal black shade. It’s visually stimulating, yet it’s also soothing. It’s loud and quiet at the same time. Even a gringo can sit outside for long spells enjoyably. 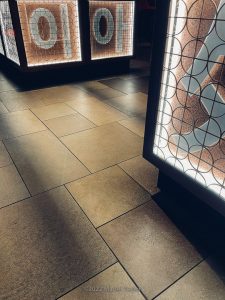 On the road again, and while waiting for a table I couldn’t help but admire this combination of mysterious lights and display reflecting off the stone floor.  The overall warm tone accentuated by the subtle green accents make for a soothing display. Just looking around and down in some cases. 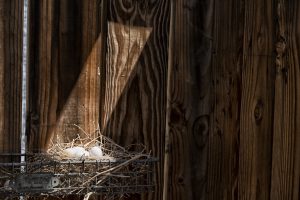 I randomly discovered this moment of illumination in my outhouse. Mommy Dove has been sitting on the nest for a long time. I check on her to watch the development of the baby birds. I don’t open the door at the risk of frightening her, but I can look through the wood slots. Recently I noticed she left the nest alone, and I could open the door to photograph the nest and its contents. I counted five eggs and was surprised at how big the eggs were. The slice of light highlighting the discovery was perfect. Photographic opportunities like this are what I so love much about photography: when the Gods open their hands and say, “it’s all yours, what are you going to do with it?” This is a portrait of life. Living in nature has brought me closer to the natural world. It’s hard to identify with nature, climate, and wildlife when everything around you is cement, steel, and glass. When light is manufactured, the temperature is controlled, and the sound of your world are horns, chatter, music, and sirens. When I first moved here, I had a hard time sitting still. I could walk in the park, minutes from my house, but never just sit. I’ve been here 13 years now, and every year reveals something I hadn’t expected. 2020 and the Covid shut down was not uncomfortable for me because I live alone on five acres. I wasn’t worried about getting the virus. Every day I fed the rabbits and birds and developed a closer relationship with them. I watched how they behaved during mating season and when they were pregnant. I got to experience the process as I would family members, and each new generation filled my space with joy. That year was not without its misfortune. Early in 2020, I had almost 20 cottontails living on my property. One of them got to know me early in life and came to me for food. I named he/she Pippin, and twice each day, I was there to commune with my little friend. But as people began getting sick with Covid, the rabbits developed Rabbit hemorrhagic disease and dropped away one by one. This affected other animals too. The Cotten tail population has still not rebounded to what it was. Before the 18th century, rabbits were called coneys, and young coneys were rabbits. Pippin was so distinct it was easy to notice him/her from the crowd. I’m going to call it him because that is what I thought at the time. Later I changed my mind and thought she might be pregnant. Pippin would wait by my steps and stand on his back legs when he saw me. He would often get very close and reach out and grab my hand. I would lead him to an area under a large Creosote, healthy with gray water, and would put down piles of rabbit food and bird food. He liked both. Pippen disappeared during the summer of 2020, along with much of the cottontail population. I’ve recently noticed a couple of baby cottontails (called Kittens). I do not see the older, larger ones, but so glad to see them around. Mommy Coyote has been living under a Creosote grove and regularly drinks out of my fountain. I saw two of her pups. Having her on the property may be another reason the rabbit population is so low. She chased a squirrel as I watched. It was fascinating even if I was cheering for the squirrel who managed to duck under my deck just before the snapping jaws came down on its tail. With lots of windows, I get to be an active observer. The camera does the same thing for me. I was timid as a child, and although I had to change that as I got older, it’s still in me. Life is illuminated here in the desert and very different than city life. Maybe not better or worse, but stripped down and authentic. And the light illuminates everything, perhaps more than we would like to see, and yet, everything we need to see. 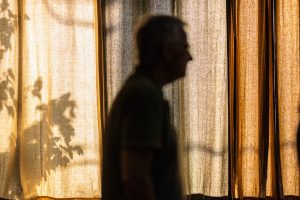 A profile is the outline of a person’s face from the side, but it is also a description of a person. Sometimes it is both at the same time. In this case, it might be both while being neither.

Try Me Once More 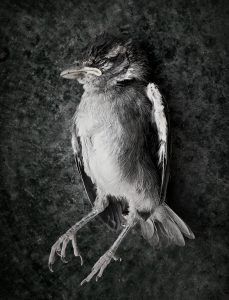 Why-do they shut Me out of Heaven?

Did I sing-too loud? But-I can say a little “Minor” Timid as a Bird!   Wouldn’t the Angels try me- Just-once-more- Just-see-if I troubled them- But don’t-shut the door!   Oh, if I-were the Gentleman In the “White Robe”- And they-were the little Hand-that knocked- Could-I-forbid? Emily Dickinson 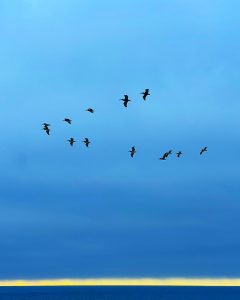 Very early in my ‘Career’ I was focused (use a pun, go to jail) on becoming an ‘advertising photographer’. You see, I had only one assisting job in my fledgling professional life at that point and that was with….wait for it…an advertising photographer. My Dad, a finish carpenter and cabinet maker, always said that ‘if you only have one tool, and that’s a hammer’ everything appears as a nail”. One day, as I was struggling once again to pay the rent etc. he suggested I call on a client of his, a very famous Graphic Designer. “But Dad, I’m an advertising photo…..” he interrupted me. ‘Bobby, you need work and this company buys tons of photography.” He gave me a phone number and a name…along with a look that told me it was a good idea to make that call. Within a few years, I had shot countless projects for that company and won awards for practically every one of them. And…I learned about ‘Negative Space’: the simple option, that offered an opportunity to leave room for elements to ‘breathe’ in composition. Thanks Dad, and thank you to Mr. Robert Miles Runyan (RIP), and Gary Hinsche, his Design Director, who gave me that first opportunity. This image is an homage to them both. 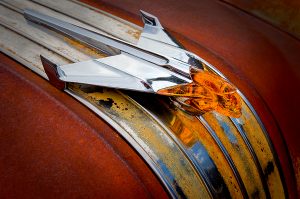 At most custom car shows you will find autos with $ 20,000 paint jobs and for the price of some of the cars you could buy a small house in the mid-west. However this patinated gem caught my attention. The owner was no where to be found and I can only imagine the history connected to this beauty. Hood ornaments are not prevalent on most new cars these days. This particular one is a great example of a 1950’s style ornament. The crystalized portion of the ornament caught the light just right and the sky reflecting in the chrome bright work laying on a sea of patina and rusted metal just appealed to me. Of all the images I created that day this one was the most gratifying for me. 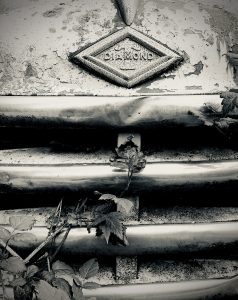 Location scouting can hold real gems sometimes. One minute you’re looking for the perfect place to shoot a commercial project and the next you become sidetracked shooting a random object in an open field totally unrelated to the needs of the day.

Never one to pass up an interesting found object combined with a tolerant client who allows me to linger for just a few minutes here and explore. It’s all part of the creative process. Whether commercial or personal the outcomes are the same. Discovery. 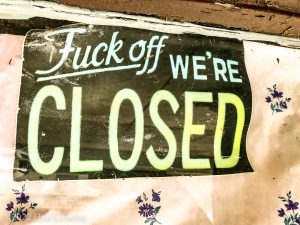 Walking around the “Funk Zone” in Santa Barbara I ran across this sign in a store front that was definitely closed. In fact it was so closed, the sign was upside down in the doorway. So this image has been flipped. Clearly the proprietors of this establishment are serious about their hours of operation.