The Daily Photo Game is a visual conversation and as with all conversations – some are serious, some mysterious and others are humorous.

The Game is a group of 10 professional photographers challenging themselves to do what they do best: illustrate stories, capture emotions and reveal concepts through photography. How it works – Every 10 days in repeating order, a given photographer’s “game day” will arrive. On that day, the photographer will create and post an image, a visual response to the day’s submission. One of the most underestimated challenges in playing the Game is the accelerated deadline – 24 hrs in which to conceptualize, source materials, shoot, enhance and deliver the image. While we call this venture a Game, it is more than that. Creating images has been a calling and a hard earned profession for all of the artists involved. The project requires a year long commitment, for a total of 365 images per year, now embarking on year eight! We all hope you enjoy the ride, maximize your desktop screen for gnarliest experience. Professional Photographer Magazine, the magazine of the National PPA, has run a two page article on the 2013 Daily Photo Game called “Game On”. Writer Jeff Kent interviewed Russ Widstrand, Martin Trailer and Eliot Crowley of the 10 player group for the article. Read the article below:

Ten photographers challenge themselves in a visual conversation – by Jeff Kent   Successful studio owners know that over the course of years, the thrill of client work can evolve into the monotony of stagnation. Last year, 10 professional photographers made a pledge to themselves and each other to contribute to a creative exercise called the Daily Photo Game. Now complete, the project yielded 365 original images—one a day for a year—made as part of a visual “conversation” that meandered from one idea to the next, from one photographer to the next. For the project, each photographer committed to taking a “game day” every 10 days. On that day, the photographer created and posted an image on the project website, with  each new one serving as both a response to the previous image as well as a challenge to the next day’s photographer. The game tested participants’ artistic and logistical mettle, with each photographer having a 24-hour window to conceptualize, source, shoot, enhance, and deliver an image. “When I was first approached about the Daily Photo Game concept, I was so discouraged about the photography industry and my personal photography in general,” says commercial photographer Russ Widstrand of Portland, Ore. “I didn’t pick up a camera anymore for personal work, just for jobs. Now, having spent a year on the game, I feel a newness in my volition to create … a kind of freedom of expression and dialogue with fellow artists that fuels me and calls me to do more.” Participant Martin Trailer concurs. “I feel more willing to explore and try new things,” says the San Diego-based photographer. “The game has loosened me up. I feel less constricted without someone looking over my shoulder. I think more like I did when I first started in the business, looking for unique opportunities, exploration, fun.” Version 2.0 of the game…” READ MORE HERE. Online article on the Game by FoundFolis: an art-buyers resource. FoundFolios published this original article on the Game. Beginning in May of this year, Eliot Crowley and a group of ten fellow photographers have begun playing what they refer to as the Daily Photo Game. Each day one photographer will post an image that is related to the previous day’s image. So, an image of a deer in the wild one day might be responded to with an image of a forest. Apart from just being for fun, the game helps the players keep their photo skills sharp. It also has changed the way they perceive the world from behind the lens. “I find myself creating images I otherwise wouldn’t have thought to if not for this game,” reflects Eliot. Since the game’s inception not one day has gone by without an image being posted, an impressive feat in this day and age. Click here to check out all the images the players have posted. For more in-depth coverage of the game, read the full article over at the FoundFolios Blog. Our first gallery showing of the Daily Photo Game was held at Cypress College in Southern California. The Show was scheduled for display from Sept. 4th to October 24, 2014, and it was extended for a few additional weeks due to positive responses of faculty and students. Four of the participating photographers, Eliot Crowley, Blue Fier, Jay Ahrend and Robert Nease from the “The Daily Photo Game” were able to attend the opening night reception and later that evening they were involved in a panel discussion hosted and moderated by Rob Johnson, Curator of the Cypress Photo Gallery. There was a lively discussion and substantive questions raised about the project concept and how the logistics of the game was played. “Gamers” Robert Nease and Jay Ahrend conceived the original concept and show layout, Russ Widstrand helped with the pagination (over 365 images on seven panels) along with designing the show invitation. Seven large 48 x 36 in. panels representing all images posted for the Games’ first year (2013) were displayed in the main Gallery. Five images from this first year were selected from each of the ten photographers, and hung as 20″ x 24″ in. prints in the larger lobby area of the Gallery. Large panels display the entire 2013 thumbnail panels for the project. Selected Photographs from the Daily Photo Game Project – By Russ Widstrand. About the Book: Russ Widstrand’s 64 page 12″x12″ coffee table book based on his photographic and conceptual conversations with players from the 2013 Daily Photo Game (DPG) project. -View the online book (click anywhere to magnify text or image) –Buy coffee table book  (on-demand printing 1 or 1000 books) About DPG: The photographs included in this book are excerpts from the 2013 – 365 image project and are not in series. The thumbnails at top or bottom of page reveal the timeline of the project. The image pairings are a visual conversation, within myself, outwardly with my fellow players of the game, and with the audience at large. Sample spreads below… 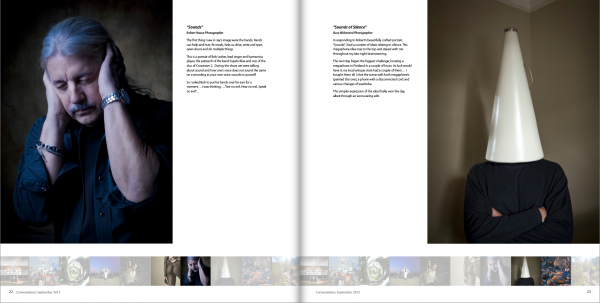 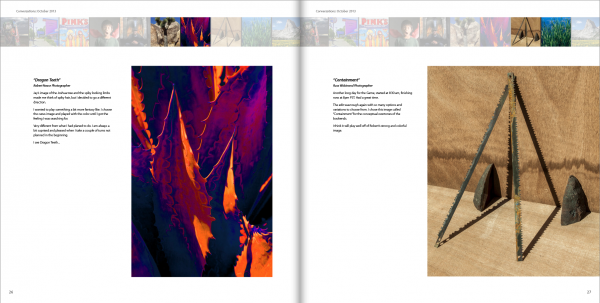 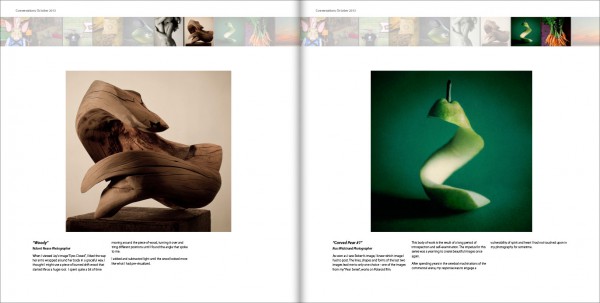