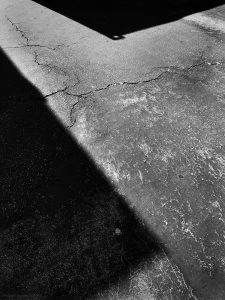 The narrow walkway between two structures had a graphic appeal but at second look the shadow play between the building and the corrugated storage container was much more intriguing to me. The direct late afternoon sunlight added to the contrast as the light fell on the asphalt. The shadow of the building being much taller than the container slightly changed the way the light formed the abstract shadows. But the shadows seem to mimic one another, even down to the little white dots in the corner area of each shadow. One white dot being sunlight shinning through a hole in the metal container and the other, a piece of squashed chewing gum on the asphalt. It all worked for me.