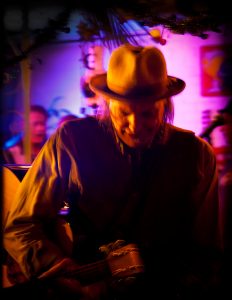 There is nothing quite like a live performance. In recent past I have attended several live concerts of various artist, all the performances were unique and memorable. With things as they are now it seems all large group venues and live performances have been canceled or postponed till further notice. For me the best thing about a live performance is when the artist often does not do the exact same song as the recorded version, when there is a variation and their rendition of the song often has a unique live fresh feel. Ansel Adams said “The negative is comparable to the composer’s score and the print to its performance. Each performance differs in subtle ways.” Depending on the mood or feeling or if time has passed there can be a variation in the newer version. Utilizing digital software, variations are endless and repeatable when needed. This image is one created at a birthday party of a musician where all of his friends at attendance at the party were also musicians and took turns playing for one another. A magical collaboration of wonderful talent to say the least. I wanted to create a feeling of the event after a performance by one of the musical artists. I raised my camera to capture one of the artists at the moment of completing a song. The fellow musicians in the background, the color and movement within the frame is a visual representation of the eclectic and unique music performed that night. Until large live performances hopefully start up soon again, I have this image and others to remind me of what I have experienced in the past and what I have to look forward to.