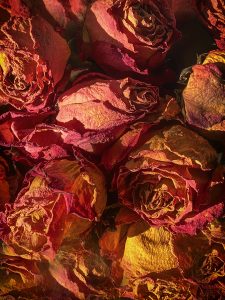 This morning was an emotional one for me, and this image is an apt reflection of that state of being. There was an explosion last evening in a downtown LA warehouse, and 11 fire fighters were badly injured. They were, as they always do, running toward danger, not away from it. All are thankfully, expected to survive. A friend quoted some lyrics of a John Lennon song in her blog post around the same time I was processing the news, and that song hit me so hard, that I played it on repeat for almost an hour. The last line in the chorus is “I just had to let it go”. I noticed the dying flowers and began to explore a photograph. The poignancy of all these elements hit me hard. I wrote these words: Raw Emotions Sashimi of the Heart Firefighters Injured Sunlight on Dead Flowers Empathy Sympathy Identifying Tears Not wanting to complicate the moment further I grabbed my iPhone. I processed the capture, enriching the colors and details. Some time passed before ‘I just had to let it go’.

Hey Bob Stevens , my name is Karim Melendez, I am writing you because I was searching images for dead flowers and ran across your photo. I wanted to ask if I can possibly use the picture for a music album ?