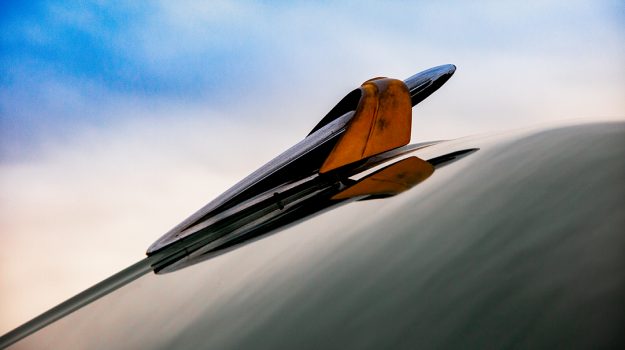 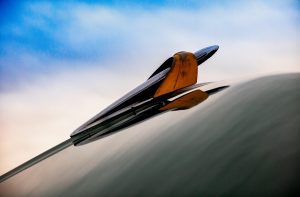 Early in the morning the air was cool and the fog was hanging low in the parking lot of a local car show. I was making images of various details of the cars. The abstract shape of this hood ornament felt rocket like to me and caught my attention. The patina of this particular piece stood out against the other colors within the frame. A bit of sun broke through the overcast sky as I rotated the image in the frame, this gave me the diagonal angle and the balance I was looking for. I found the simplicity of this image appealing to me. 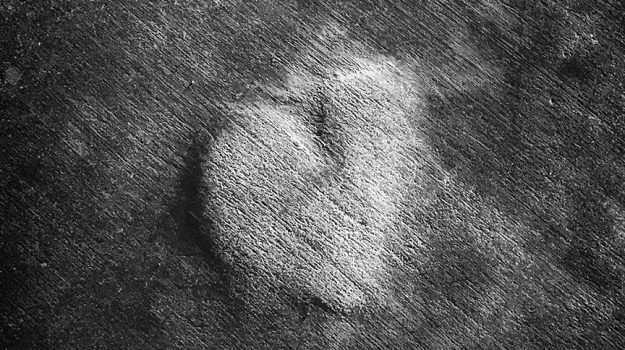 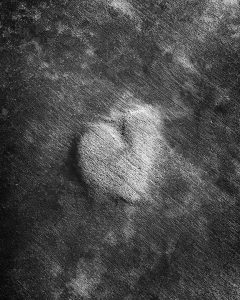 I have a temperamental left knee these days, so I often look carefully where I’m stepping/walking. As I crossed a large concrete pad, I saw this faint shape at my feet. The irony is poignant. A ‘heart of stone’ is an ancient expression with many claimed sources. Granted, this heart is concrete. But that’s a ‘stone-like’ cold, hard material so I’m good with stretching the metaphor a tad. The crosslight from the open garage door was subtle, but strong enough to render the detail. There was little or no ‘color’ in the original file, but just to abstract this image a bit more I converted it to black and white. Played around with one of my favorite presets (I can’t tell you which one now can I?) to accomplish the tonality you see here. I watched the controversial new film “Don’t Look Up” last weekend. I highly recommend it. My new mantra: “Look Down!”. 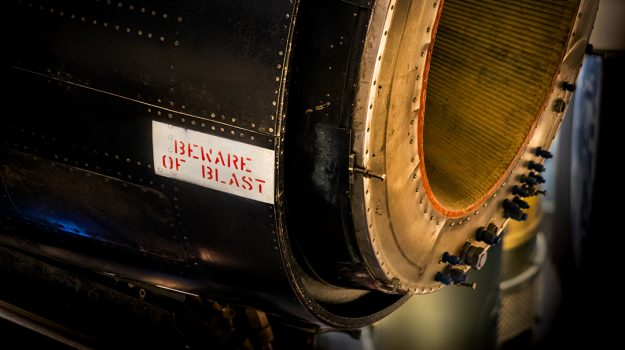 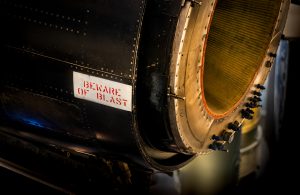 The National Air and Space Museum in D.C. houses an amazing collection of historical aviation and space aircrafts. My interest was in a certain aircraft that my father had work on, the guidance system of the X-15, a rocket-powered research aircraft built by North American Aviation. I had seen many pictures of this amazing piece of technology but to see it in real life was a treat I had waited to see for many decades. This plane flew Mach 4, 5, and 6 at altitudes well above 100,000 feet. I captured many images of this aircraft, but while framing an area near the rear of the engine I spotted some signage that just cracked me up….. a stenciled sign in red on a white field….”BEWARE OF BLAST”….no kidding. I wondered was this an inside joke amongst the crew or a requirement by some corporate lawyers…? My take away was this plane built in 1959, and that during a flight test it flew 67 miles above the earth, basically functioned more as a spacecraft than an airplane. My hat’s off to the technicians and pilots who had the wherewithal to conceive and fly this awesome aircraft. 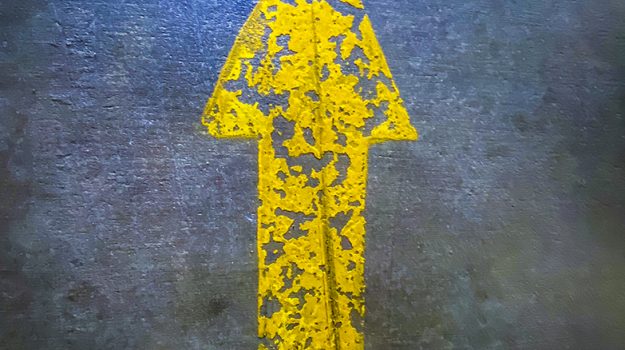 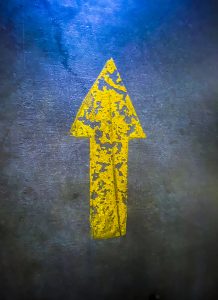 I’ve walked by and driven  over this painted symbol countless times. Today I took a closer look. After exploring various angles, as I surveyed the texture, I noticed a distinct difference between the color temperature of the light emanating from the open garage door and the warmer quality of the interior illumination. I knew that I could capture that nuance and exaggerate it in post production. The vibrant result is what you see here. The patina and ‘flaws’ in the paint are a result of years of wear, weather and the ravages of time. Not unlike our ‘human condition’. Gray hair and wrinkles, joints that may not move as smoothly as they once did…symbols of life being lived and time having passed. I wish you a long life Yellow Arrow. 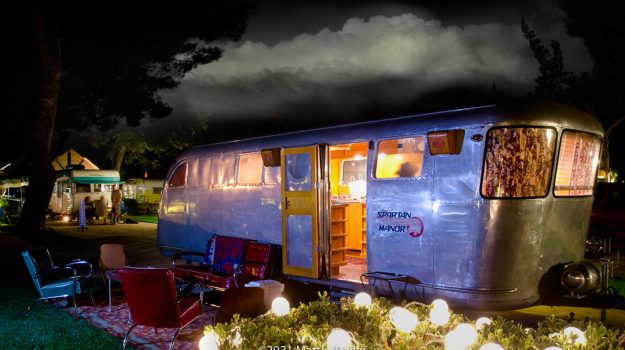 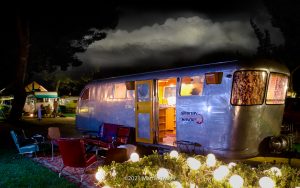 Couldn’t resist using one of my many trailer images today.  This is from one of the many vintage trailer shows I attend.  The Spartan brand was one of the best made back in the day, post war models. Going to these vintage trailer shows is great fun walking around appreciating all the work the people bring to the shows.  The trailers are something to see as the vintage models are in most cases upgraded, but the vintage look and feel is maintained.  Most people period prop their surroundings inside and out. This particular show had the added benefit of a thunderstorm and lighting storm several miles away, but very visible.  No rain here, just over there to the east. 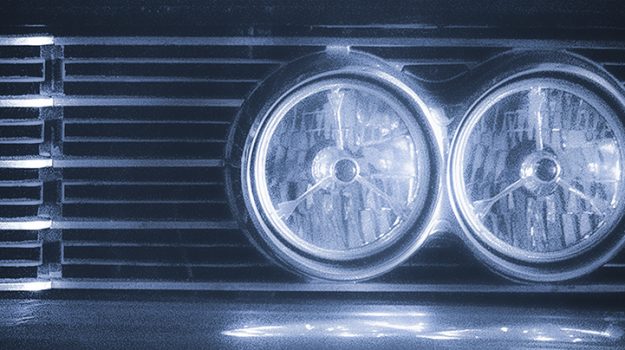 The 1965 Lincoln Continental. This view displays ONE HALF of the massive front end. The vehicle had ‘suicide doors’, so called because rather than the wind rushing down the side of the car tending to cause the rear door to close once opened, the contrary was true: said wind made it more difficult to close the door once opened if the car was at speed. This design characteristic was said to be favored by gangsters as it made pushing an unsuspecting passenger out the door much easier. This one is black, of course, as it should be. I discovered it in a parking garage with random light sources bouncing and reflecting into the weathered chrome and alien like headlamps. The glow and blue tint I added seemed a fitting tribute to this legendary ride. 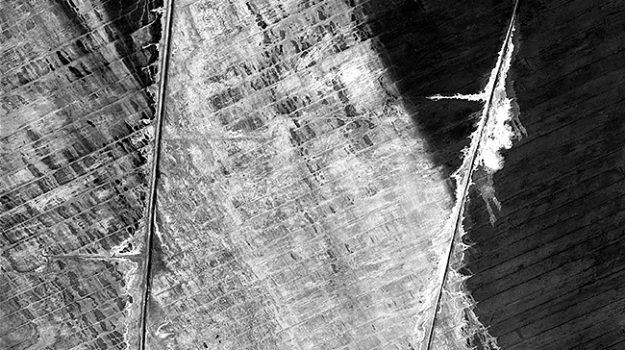 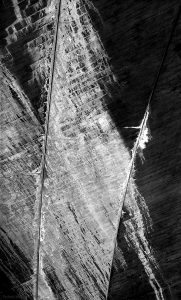 This time I found myself pointing my camera straight up at the under section of a freeway overpass. I enjoyed the abstract tones of the white sediment on the surface. These white chalky deposits are the salt residue that leaves it’s tale when liquid seeps through cracks in a concrete structure and within the moisture is calcium salts that leach from the concrete. When this mixture reaches the surface it reacts with CO2 in the air and the white deposits become insoluble calcium carbonate. All this sounds slightly scientific, I found it to appear stunning in it’s randomness. Nature always finds a way to create beauty, even from man made objects. 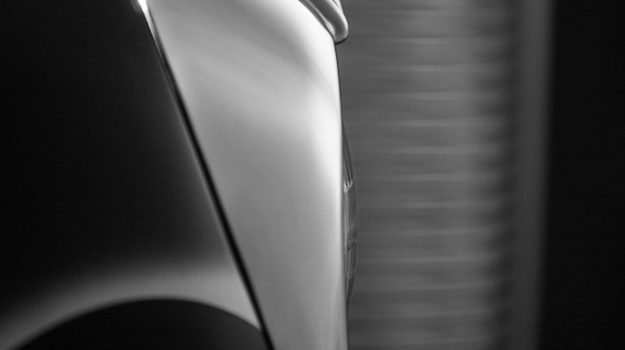 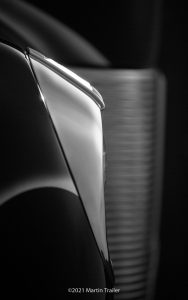 I like the design of older cars.  This one is from 1940, a ’40 Ford Coupe custom.  Black with ghosted silver flames that sitting, looks sinister and fast. Autos after WW II changed quite bit with the grills more horizontal and most pre-war cars carried the older style of more prominent radiator grills. The design had more rolling curves with some art deco influence. By wind tunnel design standards today, they were not all that sleek, but sure did look good. Quick fun ride. 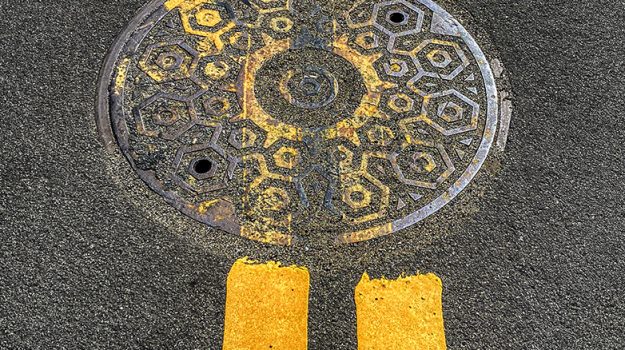 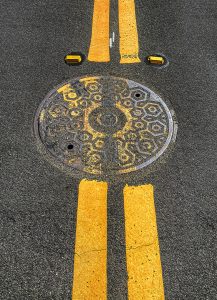 This scene spoke to me in a loud voice considering its simplicity. It represents a ‘timekeeper’, a record of what happened then…and then….and then. The manhole cover preserves the chronology of different times the yellow lines were painted. As it was lifted, moved aside for access and then put back in place, the circular metal piece received the renewed striping in a different orientation. Each time. You can see at least three episodes, perhaps a fourth. I could have removed the two small white paint marks, and chose not to. They harken back to newly paved asphalt which had no centerlines and served as guides to where the center of the road existed for the mechanism and machine which applied the information. I’m always in awe of the simple details which speak about the days between now and then. 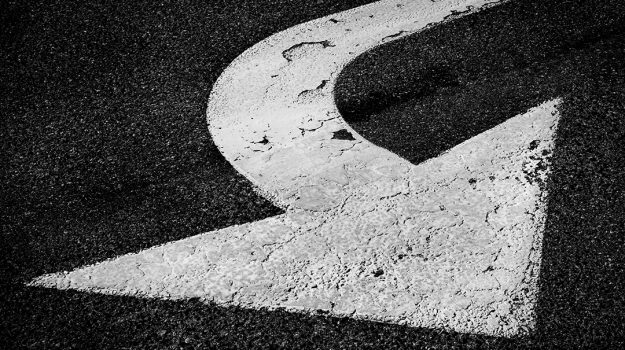 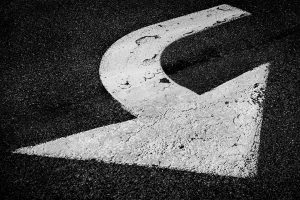 Graphic signs have their own language, and are used to communicate and convey information. Usually to assist the viewer with any decision based on the information provided. Often no words need to be used, the graphic says it all. From traffic flow, restroom sign, deer crossing to notification of curves ahead. My image is a simple curved arrow, with not to much misunderstanding in the message. Cropping tight and relieving the image of all color it simply says..”This is The Way.”