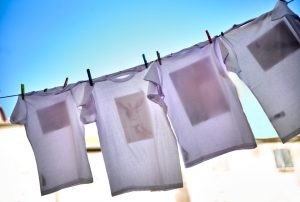 A light breeze and the afternoon sun helps me fill my photo needs for today. Summer is the time to hang the laundry out and today is no exception. Wandering around under the suspended shirts offers lots of choices for composition and I spend more time deciding what to chose back on my laptop than I do shooting in the first place. 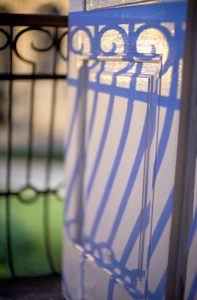 Searching for a picture today found me all over the place hoping to find the elements I wanted to match what was running around in my head. Always a dangerous place to be on a busy day like today.

Not until the end of the day did my search end just as I was about to take another path to find a picture. It’s always a balance between trying and trying too hard. It never seems to come when you hold on too tightly to any one idea in your head. Relaxing the mind relaxes the eye and something you might have passed an hour ago can have new meaning.

Just letting go sometimes is all it takes. 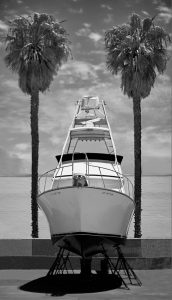 Yesterday I had seen this images while making a walk through the yard near the end of the day. I was drawn to the symmetry and contrast between the natural and man-made worlds so I grabbed a couple of quick photos thinking it might work for something in the future or be something I could revisit later this week.

This morning, I did just that and took a little more care to balance the palms between the boat and clean up the distractions that were present the day before.

The title between two palms a play on one of my favorite comedy sketches Between Two Ferns. 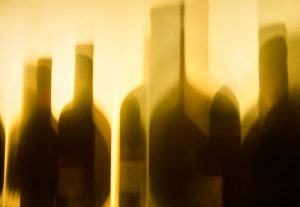 Long shadows cast against a glass wall filled my frame today. A quick capture and I was on my way. 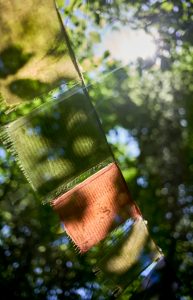 Today was spent consumed with location scouting here in Oregon. Near the end of the day, my final location was a 20-acre property east of Portland along the Sandy River. A cross between old school farmland and hippy commune, it was the sort of place I could call home.

Across a daisy-strewn field, a shady lane was cut into the pasture along a bank of trees where a parade of aging and faded prayer flags were strung at head height. A common site on many properties in the Northwest, here a series of 15 flags were strung one after another.

I was captivated by the series of flags layered one by one, but found the effect hard to capture amongst the dense overhanging trees. Never quite able to gain separation between the two. Never really giving justice to the weathered material almost translucent in the afternoon sun.

So my focus shifted to the smaller more delicate material and how it played between the sun and shadows as the wind slightly moved the fabric in elegant sway, the words barely visible as the sunlight projected against the tattered cloth. 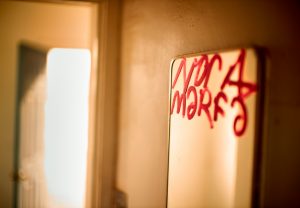 My love of abandoned buildings has seen a uptick in opportiunities in recent years with the slowing ecomony and Americans never waining throw away society.

It takes time wandering an empty space for opportunities to present themselves. That’s partly by design to fully explore the locations and also to just spend time imagining who once lived here and how it has come to be in this state. With the lay of the land, the only thing left is to find points of view that can capture the abandonment and ruin of this place. 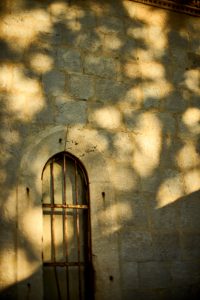 Searching for archways here in the old town of Split is like trying to locate a peice of fruit in a orchard. Finding the light to go with it can take a little longer.

Old towns are often loaded with old trees and that holds true here as well. With patience, the shadows fall into place and a picture begins to appear.

Wandering the streets with time and a camera never gets old. Finding something new in an old place makes it even better. 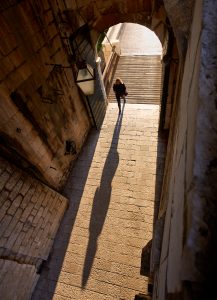 What I was looking for was some early morning light, a cup of coffee, and a city waking up. What I found was a walled fortress with a fortified gate through which people have entered for over six hundred years.

A small tedious staircase set into the stone high over the archway was the chance to find an angle that was missing from the street. It simplified the elements I want to capture and eliminated much of the distractions visible while looking through the gate.

I’m clearly not the first person to view the gate from that spot, but having a camera certainly makes me feel like I am. 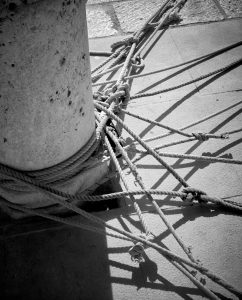 In the 17th and 18th century unused cannons were buried barrel first along the town cays or harbors to provide locations for visiting ships to tie. Today they still provide a secure place to anchor as boats loop their lines ashore.

Here the varied lines of color and thickness play against the stone harbor promenade. The late day sun casting deep shadows across the stone. Another evening safely moored in the harbor confines. Tied to the history of the region. 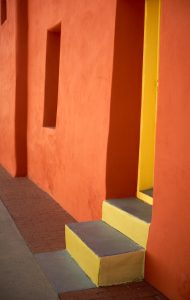 Sometimes it’s the simplest choice that has the most impact. Pulling out the extra elements that ultimately clutter and distract the viewer while detracting from what you really want to convey.

Distilling down the components of a photograph into its most basic form. Color and shape. Nothing more. Nothing less.