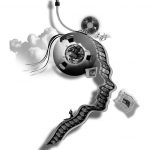 This piece of art was conceptualized, sketched and executed for a client then called “Multimedia”, the network where Oprah a got her start in the 90’s, it was the cover of their annual report. At that time, clients came to me for the whole enchilada. That is to say I conceptualized and sketched out pencil drawings and then faxed (yes faxed) them to lead designers and CEO’s for their approval and or comments.

The fundamental premise behind this body of work was discarding the rectilinear frame that historically defined the nature of photography… the edge of the negative, and the edge of the print. The advent of digital imaging technologies in the 90’s merged with traditional photography and allowed me to create a free-floating and organic photographic form against a white background that became my signature style for this body of work.

My earliest days as a photographer were always about disruption. Of course this is the hackneyed buzzword of modern day business now. But back in the 90’s, my interest was in disrupting the norm and the expected in my photographic works. I would purposefully shoot the wrong film for the wrong purpose, boil negatives and then fingerpaint the emulsion to create a painterly effect and vattempt to develop 35mm film in its own canister. But mostly just muck about in an irreverent way with the “preciousness” of photography. Photoshop was a natural extension of my own disruptive interests.

Ironically what drove me out of this particular style was yet another form of disruption, democratization. That is to say when everybody and their mother started adopting Photoshop as their means of visual communication, I was ready to exit this style.

Later, I developed a more personal and introspective body of work called “The Pear Series“. Many of the participants in this very collective (Dailyphoto Game) were members of an earlier artist forum called “Heartstorming”, facilitated by Ian Summers, where this later body of work was developed.