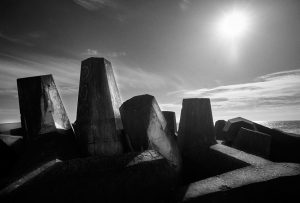 Protecting a harbor entrance from the relentless pounding of the ocean waves is no easy task. Just looking along the rocky shoreline here in Northern California and you can see that even natures rocky cliffs are no match for the oceans fury. In 1963 a British designer created the dolos and placed it and several others (dolosse) along the entrance to East London Harbor to reinforce the seawall there.

Today thousands have been placed around the world to dissipate the oceans energy at harbor entrances. One such location is here in Crescent City, CA. where a long walk along a breakwater finds a jumble of dolosse guarding the harbor late in the day.

I had originally seen them from some distance and knew there was something worth the walk. It became a bit of a study in design and skill climbing among these monoliths of concrete and steel, searching for just the right arrangement of shapes. I was only seeing this entire location in black and white which helped narrow my point of view and my final choice.

reminds me of the monolith in 2001: A Space Odyssey