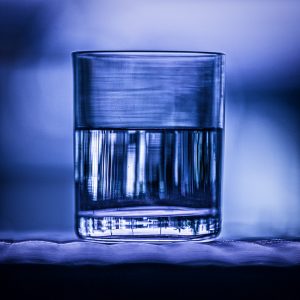 I was experimenting with a glass containing water. Using the table on my balcony (otherwise known as “My Pandemic Outdoor Tabletop Studio”) I began to play with the amount of water and was drawn to filling it halfway. Being a fan of the ‘Glass Half Full’ quote as a representation of any state of affairs, particularly emotions, I began to shoot. I looked at higher and lower POV”s and settled on this one because I liked the flat perspective. I was chasing the light as the sun moved in and out of cloud cover, so was not paying much attention to details. It was not until I began to process the image that I noticed the refraction (‘Deflection from a straight path undergone by a light ray in passing obliquely from one medium into another (such as glass) in which its velocity is different.’) of the details from the background as they appear in the very bottom area of the glass! So cool. And as for the quote, I assert that regardless of the volume of water in the glass…there’s water in it. Looking for positivity and possibility at all times! Boom.

2 Comments for Glass Half Full

Beautiful, love the little strip of landscape at the bottom of the glass

Thanks! I did not notice that myself until I was processing the file!