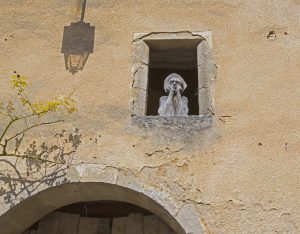 I like old villages, especially the fortified medieval ones. I find them very appealing. I’ll get up with the sun and wander around the near-empty village chasing shafts of light. It’s quiet in the morning and not a lot of people around. The people who live in these old villages are often up early as well. I’ll see them adjusting their flowers, taking out the trash, talking to each other. Some will almost run back into their homes. I can feel their fear. I will say hello in their native language and hold up my camera while making a gesture that asks if it is okay to take pictures. Usually, when they see I am not a predator, they relax. This image is a simple flowering vine, the partial arch of a door, and this woman in the window. She watched me walk back and forth on the street where she lived. I was waiting for the light to change on her neighbor’s garden, and at first I thought she was a human neighbor. But on closer inspection, I realized her gaze was permanent, a wistful stone neighbor contemplating life in her village.