One Block Off Grand 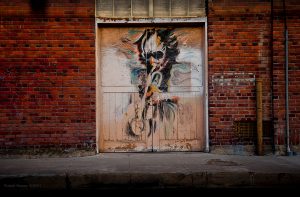 As I was hunting for something with texture to create some images, I spotted this old building with it’s unique doorway. I had driven past this area a few weeks before and made a note to return when the light would be more to my liking. The contrast of the musician on the doorway with the red bricks and concrete was just what I was looking for. The juxtaposition of the illustration with the graphic pattern of the bricks delighted me. The dark and light colors of the bricks appeared as notes on a stanza. I have always believed there to be a connection between graphics and music in the way they both deal with timing, tone, contrast and proportion. If you look at the image for a while and remain very quiet, maybe you can hear Miles blow’n “On Green Dolphin Street.”