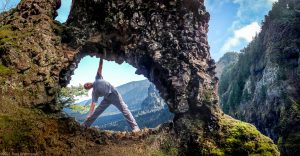 My buddies and I have covered some pretty fascinating terrain in Oregon’s Columbia River Gorge. My friend Larry, a seasoned wilderness photographer, has introduced Eric and I to some spectacular hikes.

This image was taken at “Rock of Ages” rock. Likely formed by the mega floods of Glacial Lake Missoula, which repeatedly tore through eastern Washington, Oregon and the Gorge around 15,000 years ago. There is evidence of at least twenty-five massive floods, the largest discharging about 10 cubic kilometers per hour (2.7 million m³/s, 13 times the Amazon River).

We are all yoga practitioners so we took the opportunity to do a little stretching before we headed back down the mountain. The descent was damn near vertical in some places, so walking poles were a must on this adventure.

Sadly, when I viewed this area on Lightroom Maps, it showed the burn area surrounding Rock of Ages from the massive fire that burned through here several years back. It is now a closed trail.

4 Comments for Rock Of Ages

Thanks Jeremy. You threw me a curve ball on this one. Glad you liked my follow.

An arresting image and story.