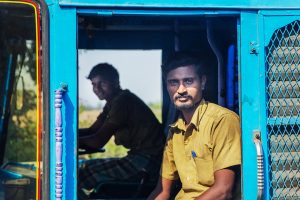 While traveling through India a few years ago, I found myself in a tour bus…something like the Greyhound busses here in the US. Much of the time we were on the move which made shooting from my window seat dubious at best. Occasionally we would be stopped in traffic and on one of those occasions I made this photograph. It would never have occurred this way had I been at ground level, as this man and his driver were in a very large truck. As it happened, from the height of my seat and his, we found ourselves eye to eye. I raised my camera to shoot, and paused, taking it away for my face to smile at him, and then continued to shoot. I am very fond of the connection portrayed here. Two total strangers, likely to never see one another again, making a connection. The windows to my soul gazing into his eyes, and he into mine. Every time I look at this image I smile.