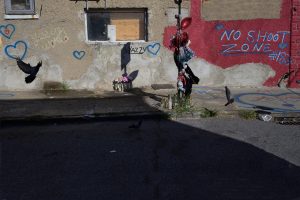 Roaming the streets of Baltimore, I’m often moved by the sight of No Shoot Zones. There are about 200 of them in the city, most of them painted by rapper and ex gang member Tyree Moorehead as a way to both memorialize victims of gun violence and curb the violence. Even before George Floyd’s murder, there was a pervasive sense of betrayal and racism by a corrupt police dept and criminal justice system. Tyree Moorehead took to the streets with his own idea and a can of spray paint. His message goes “…straight to the shooters,” he says.” I can look them in the eyes and say…I was shooting too. But, what I didn’t have was a me back then.”

Jennifer Bishop this composition just knocks me out. All the contrasts- light and shadow, the hearts and birds dancing across the hard landscape, evidence of humans and the absence of humans. Love, love, love this!

Thanks Ruth Quinn for noticing the exact same things that pierced my heart too!