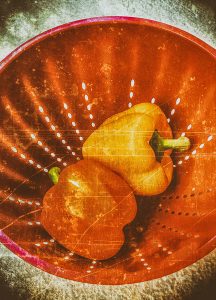 One of my earliest influences when I began the pursuit of Photography was Edward Weston. He created a memorable image of a bell pepper. Black and White film, pretty sure the camera used was an 8×10. As I was considering what to shoot today, I remembered that image and chose to create a tribute. Imagine that although color film was hard to come by at the time, somehow, someway Mr. Weston came across a single sheet of that rare medium and shot one sheet. After processing this mythical material, he made a proof sheet, a contact print. Many years later, it was discovered, a little worse for the wear. Filed away in some drawer or cabinet, the emulsion had been scratched and abused, and yet….the colors and shapes survived. Colorful relatives to the famous pepper that became one of the most iconic photographs ever taken.