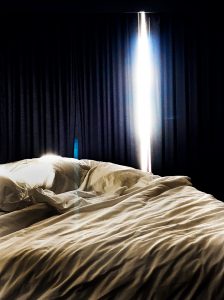 I woke up early before everyone else. I was nursing a cup of coffee, it was very quiet as my attention was drawn to an opening in the dark drapes. Within only a few moments the sun had risen and was cutting through the opening in the drapes like a hot knife through butter. Only a small sliver of direct sunlight illuminated the whole room by bouncing off of the ceiling and the white walls. I found the light falling on the bed sheets intriguing and made a few captures but my attention was diverted by the contrast of the light colored sheets to the dark blue drapes and the apparition like figure that was the light. I made three captures. My feeling was that the light was beckoning me to get up and start the day, come outside and see what the daylight might reveal to me visually today. Who needs an alarm clock with an invitation like that.

I’m with Russ on this one, nice response dude!

Thanks Dude, much appreciated…..

Thank You Russ, “One should not only photograph things for what they are but for what else the are.” Minor White
I so believe this thought….