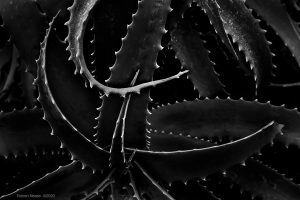 I was working on a different image for today when I saw this wild bunch of succulents growing at the end of a walkway. The light falling on the scene was being partially blocked by a railing which gave me the advantage of a slight gobo (or flag) blocking light from a portion of the image area. This caused the thorn portions of the leaves to be brighter and the shadow areas and dark leaves to have less light falling on them. Framing various captures, working quickly before the light changed, not trying to overthink it. Later while processing the files I realized it was the first frame that became the hero. I had gone with the instinctive feeling rather than conscious reasoning, basically I went with my gut feeling while framing and shooting. I came to see that it was love at first sight with this image. The original capture of the color was not appealing to me in it’s greenish hues. The abstract feeling of the plants with all the curves appeared like someone’s hair gone wild, so I decided to create a monochrome file because that is the way I envisioned the image in the first place. “Aloe arborescens” is the name of this striking succulent, or “Krantz Aloe” as some people call it. I just think of it as Wild Hair.

Message*Thanks Russ, the abstract feel of this one appealed to me.

Robert you are killing it lately!

Thank You David, I am always mesmerized by your B&W images.