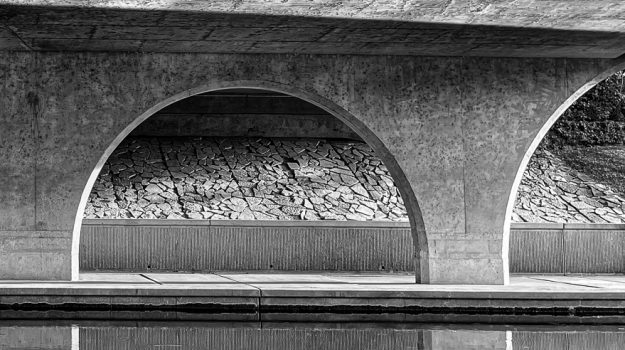 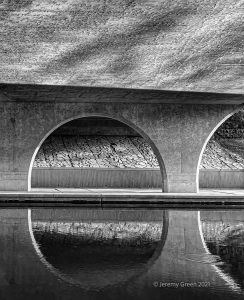 The impressions that move me to make a photograph are hard to describe in the written word sometimes. My favorite works are created by intuitive action in a moment, when my intellect takes a back seat and my heart drives. That is true for the development of the image too. Anyway, this photograph is one of those. 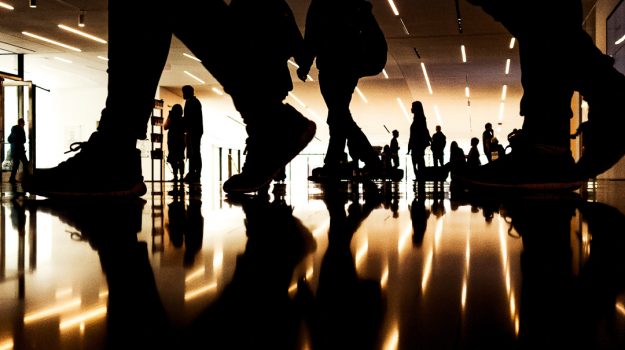 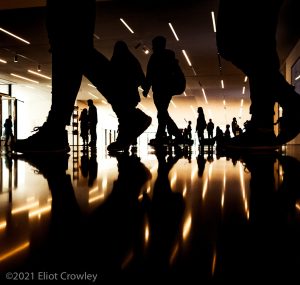 Whenever I see a shiny floor or surface, I look for reflections. Even puddles on the street are a source for observation. This floor was in a SFMOMA. So naturally I decided to make some art out of it. 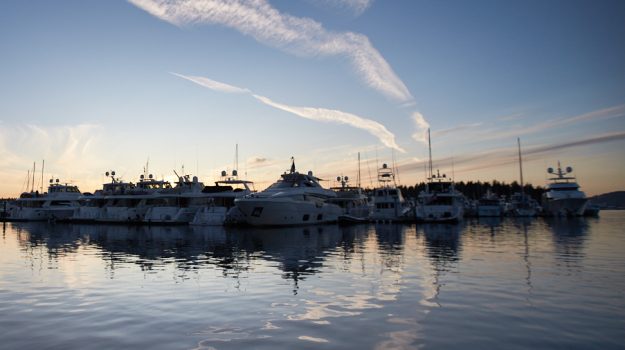 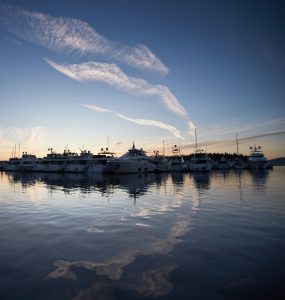 Back for a night into the world of wifi and wooden docks dovetails perfectly into a chance to upload a play and walk to shore rather than rowing in.

Friday Harbor is the epicenter of boating in the San Juan Islands of Washington State. A summertime playground where mega-yachts mingle equally with day sailors and commercial fishermen. At the end of the day, with most everyone settled in for the evening, the chance to see the congregation of boats big and small is always impressive.

Here the mirror surface of the inner harbor plays with the silhouettes of radar domes, satellite dishes, and the dissipating contrails of passing planes as the sunsets. 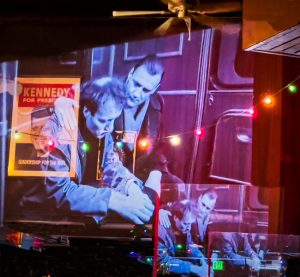 Lately, I have been playing around more in post-production. Manipulating images more than is the norm for me. Maybe it’s because I have been retouching a large commercial project the last week or so and the urge to create something that is not picture perfect finally took hold of me.

I’m far from even reaching an elementary level of competency in composited imagery… so when I found an example of what I would love to create as a montage, but in real-time, I jumped at the chance to capture it.

Part motion picture projection and part plexiglass partition, the only post-production on my end in this image was in a simple crop and some applied contrast.

A true multi-media capture playing off a darkened bar and all that was present as I sat quietly sipping a cool beverage wondering want direction the evening would take me. 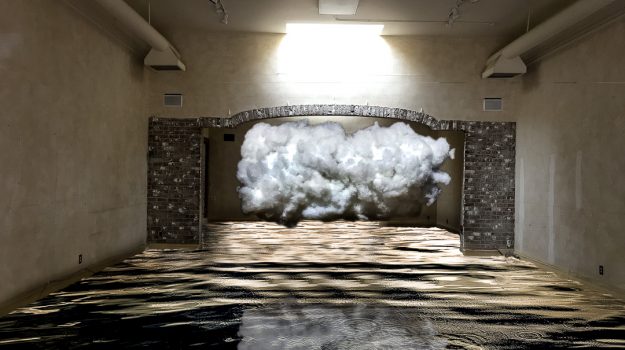 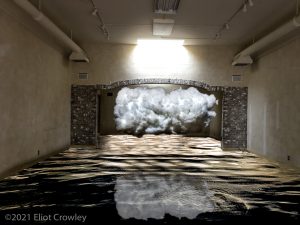 Ok this is a composite. I’m not really trying to fool anyone, but it was fun to try and figure out how to make this at least look real. Parts are from all over the place. The cloud was a piece of art in a store for sale. The interior is on State Street here in Santa Barbara, and the water from a lake in Wisconsin.   Enjoy. 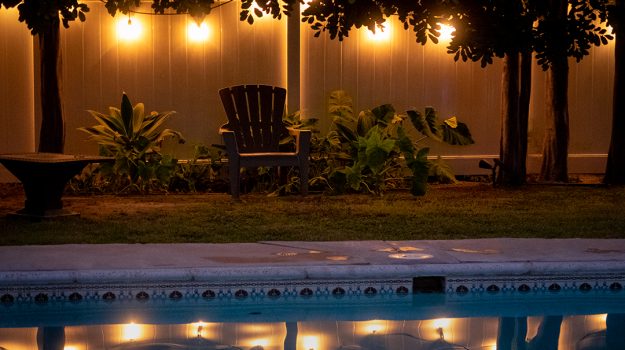 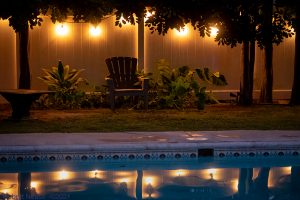 This backyard area only a few hours before was the scene of a party with several friends, neighbors and family members in attendance, All sharing stories, telling jokes and laughing, with party food and drinks in abundance. From a slight distance only the hum of mixed voices and an occasional laugh rose above the music. Later that evening from the other side of the yard with this location vacant of people I saw a serene scene. I was first drawn by the little lights hanging on the fence but on closer inspection the partial reflection in the water at the pools edge drew me in. The light play on the water’s surface intrigued me. I love reflections and have created several images with reflections at this location. My thoughts went to how we remember events and experiences, how much like a dream, we sometimes remember in a somewhat distorted reflection those events and experiences. It’s all about the point of view, sentiment and opinion. As photographers we can make the choice as to how close to perceived reality we want to make our images, a duplicate of that perceived reality or an illustrated illusion. In this instance I chose to show both. 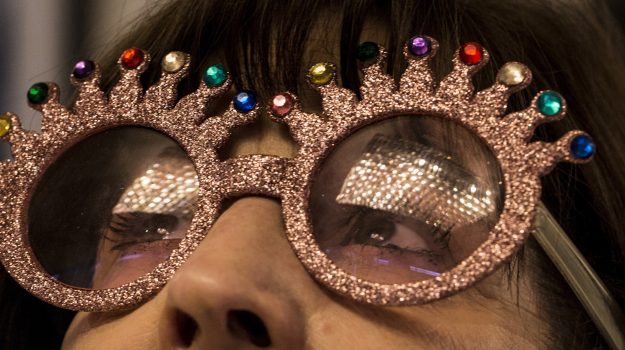 Blue Fier “Sparkles” 1/30/21                        I woke up in the pre-dawn hours this morning envisioning using my backyard light strings reflected in sunglasses. So I drafted my wife, who is a good sport most of the time, for this project, awakening her at 6 am. She came out with this wacky pair of glasses that she uses to sing Happy Birthday to her students, by zoom these days, of course. Oddly, she didn’t seem that surprised by this request, which goes to show you what 28 years of marriage to a photographer can do. I promised her a strong cup of coffee, and eventually we ended up back inside with these reflections of the crystal lighting fixture. 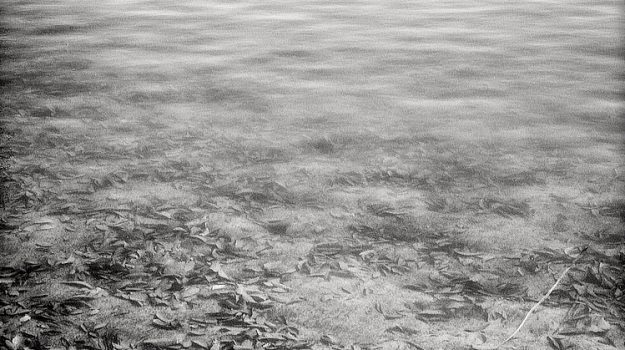 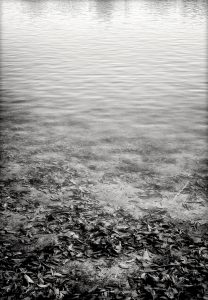 This is an image of a shallow pond in Phoenix, it’s probably a football field in size.  This has to be the cleanest pond I have ever seen. It’s clearness and the angle of the sun to the camera helped to make a distinct transition of view from just under the water surface, the earth, to an opaque, etherial, &  spiritual body water.  I believe that the image created here, is not a mirror of this habitat, but a hopeful reflectance upon it. 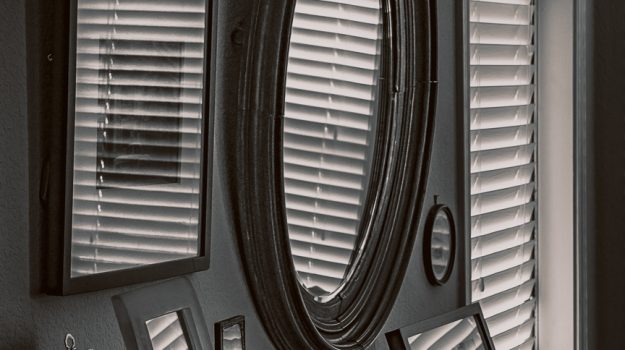 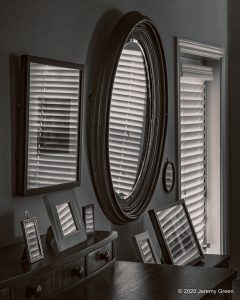 The master bedroom is my favorite place in Texas. In summer we keep the room cool and dark as a refuge from the intense summer heat. Last summer I caught a glimpse of this array from a certain angle, which is most noticeable when the contrast between the bright light outside and the darkness inside is highest. With a little nudging here and there, I got this picture. It reminds me of the coming white hot days and the serene comfort of the cool darkness of this room. 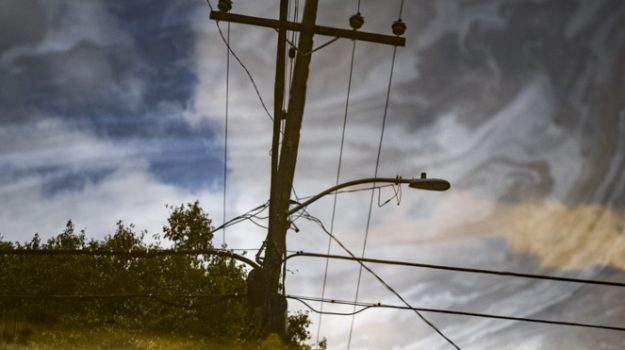 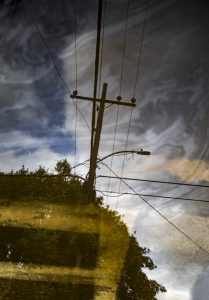 Things are changing and not in a good way. Out early this morning the streets were empty. Yes, it was a Sunday and the weather was not really worthy of a leisurely stroll. Searching the blocks around my place for inspiration was most certainly a solitary journey. Collecting images for review later today the feelings of the past week and notably today decidedly affecting my mood and point of view.

My intent was for bold imagery with strong lines. There was an abundance of choice in the small area I was circumnavigating, but what really captured my attention was a large rain puddle that had formed on the low end of a street corner I was crossing. Earlier in the week, I had thought about photo compositing images to create a single image for this week’s effort. The abundance of social distancing allowing more time than usual for sitting inside on the computer.

What I found instead was such an image present in real-time right in front of me. Transparent layers of water, motor oil, and an unsettled sky. Crosswalks and clouds with the swirl of petroleum distorting the image spoke volumes to the uncertainly I was feeling this morning as I wandered quietly on empty sidewalks and abandoned street corners.

At the current rate of change, it will be interesting to see where we are ten days from now.