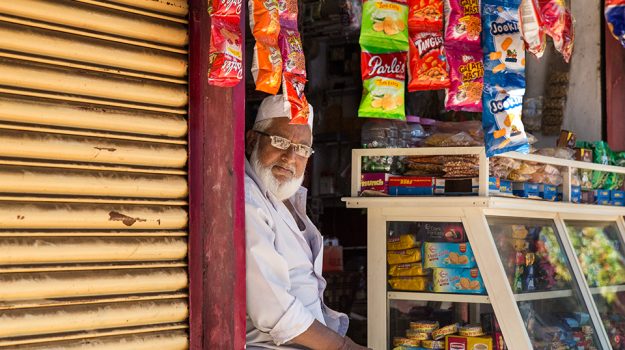 What is a camera in 2016? We all have our phones constantly poised to capture what comes our way, but when do we need a ‘real’ camera? On a recent trip to India, I weighed carefully the option of leaving my DSLR behind. There would be issues of security and potential theft, to say nothing of the chaos in the streets and villages I was sure to encounter. However, that voice inside me which always speaks the truth, said “you must take your camera…you are a photographer.” At times I felt exposed, surrounded by so much poverty while carrying around a $5K rock in my hand, but this image would not have been possible to create without it. The ability to zoom in, and the rapid fire motor drive which allowed me to grab multiple frames in a second, produced what I was after. Walking up to the vendor’s stall, I pointed my camera at another subject. He was engaged with a customer at first, and then out of the corner of my eye, I noticed him look in my direction. I panned my camera, and the moment was preserved. As a photographer who has spent so much of his career ‘making pictures’ with control and creative responsibilities, this street photograph which was grabbed in an instant has more meaning and depth for me than any ‘commercial’ image that comes to mind. The orange bag of chips hanging from above and overlapping the man’s head represent imperfection and happenstance in full force.
Posting....