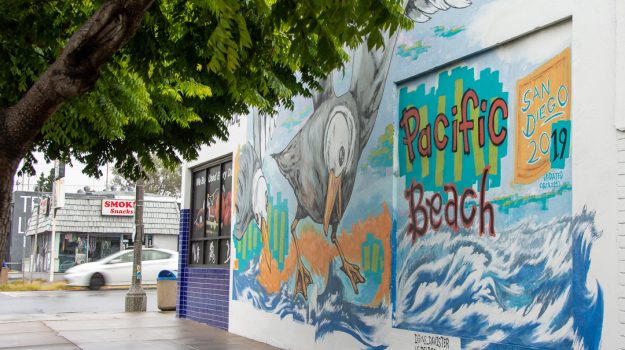 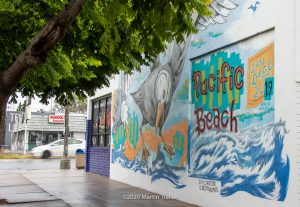 Walking this morning I came upon this mural near my home.  Living in a beach area the one thing that is usually constant are Seagulls.  This morning I didn’t see a one out  on this rainy morning, except here painted on a wall. So all is normal, just present in a different form. I shot this documentary image in Hollywood while attending college in the early 80’s. I have always loved it, and the Game gives me an opportunity to have it be seen in the light of day. This street scene has a wonderful composition, it is fantastic dance between the larger-than-life celebrities and the “little people” passing them by. The result has the uncanny effect of integrating the two subjects, mural and walkers. The black silhouette coupled with the black mural background, unites the whole image as a singular expression, not two different realities. I also love the compositional tension between Astaire’s gesture and the opposing silhouetted figure. Even the walking woman at bottom left feels like she is from another era. Apparently, the wall and mural came down in the Northridge quake, but was partially rebuilt and repainted by the original artist, Eloy Torrez. After the quake, people took the fallen wall debris and various pieces of recognizable faces as star-struck souvenirs. It is located on Hudson Avenue in Hollywood. It is cool to be able to preserve a bit of the original mural through this documentary image, one of the true strengths of the documentary experience.
Posting....