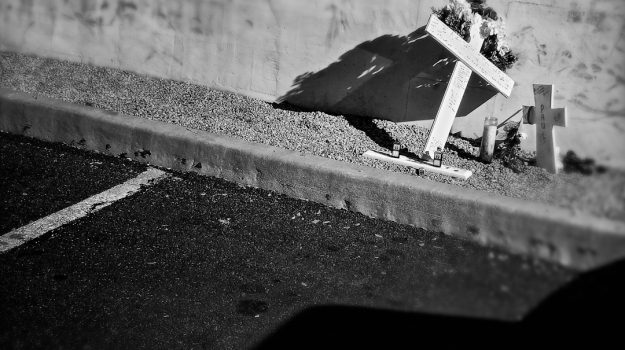 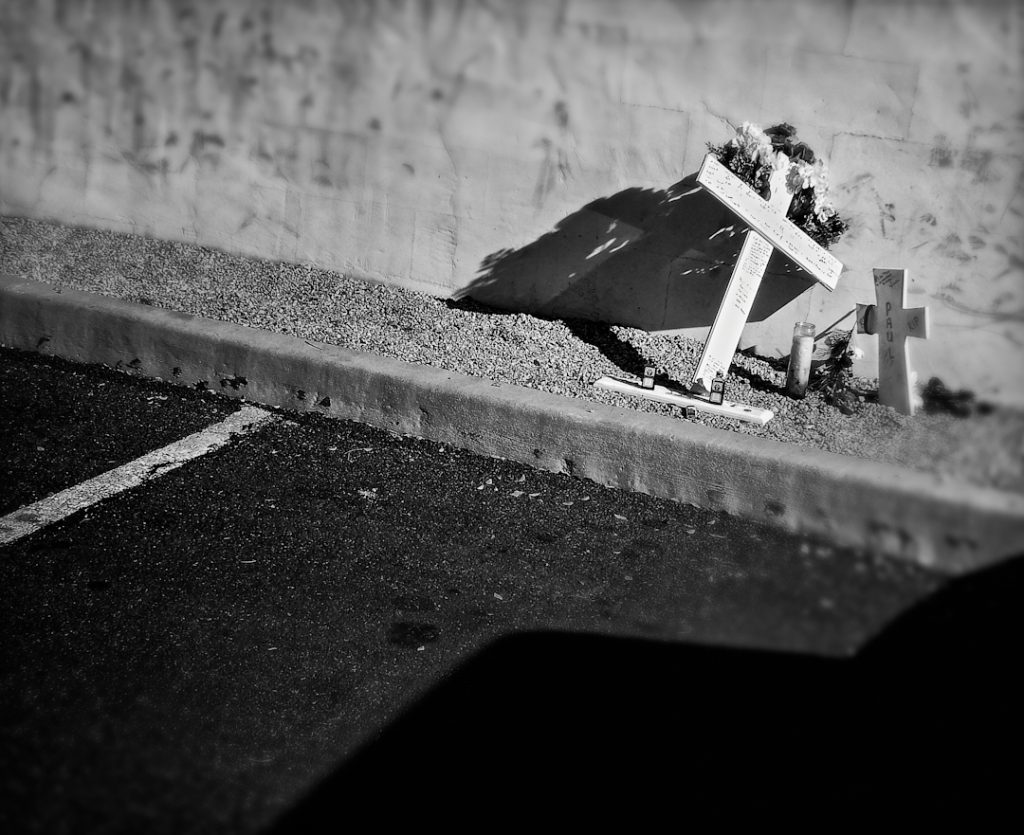 Death is always a morbid but interesting subject.  This was also interesting to me cause it was in a small church parking lot.  Two crosses,  one of them had a lot of signatures and the other one had a printed name, Paul.  I processed the image to have a mysterious, strange, and noir feeling, to match what I  experience 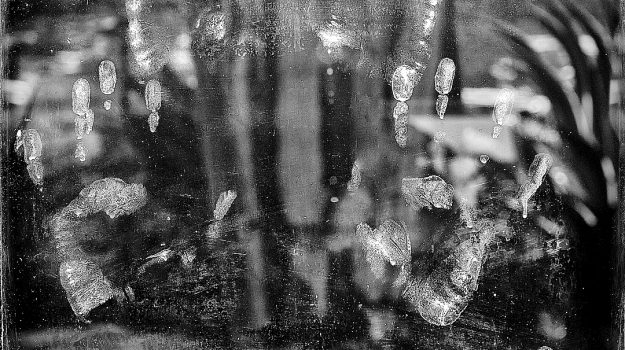 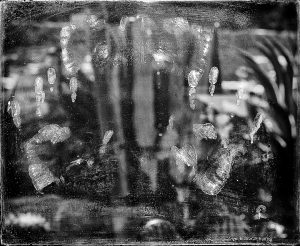 The sun was coming through the window pane full blast, and conveniently let me see where my niece and nephews had been playing.  Like memories embossed in space and locked in time.  Now locked two dimensionally photographically, to share.

Home Of The Indians 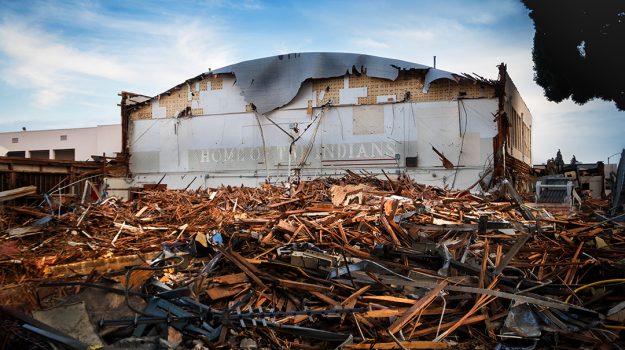 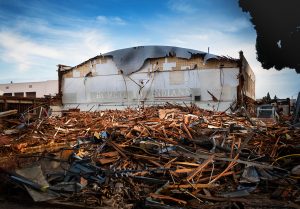 I have been working on a personal photo project for the past several weeks. Returning to this location every few days to record the time line of a demolition project. This building or what is left of it was at one time my High School Gymnasium. The Fullerton Union High School Gym, built in 1922 at the time was surrounded by orange groves much like the rest of the county. As the story goes it is believed to be the oldest High School gym in Orange County, CA. Condemned in 2019, the demolition slated for the beginning of October 2020. I decided to choose this image because of the visual contrast of the project time line. The visual representation of all the cheering from the basketball games, the P.E. classes, the music bands, and all the activities that made for great memories over the decades seemed mixed in with all the broken wood beams, plaster and busted up pieces that lay in a huge pile beside the remaining part of the building. There is faint large type left from letters removed from a wall, a reference to the school mascot. This image is basically the half way marker of the tear down. On the opposite side of the campus a new gym is being erected. The new structure is being build with concrete and steel, not wood and plaster, but my hope is that great new memories will be made in the future in this new gym. 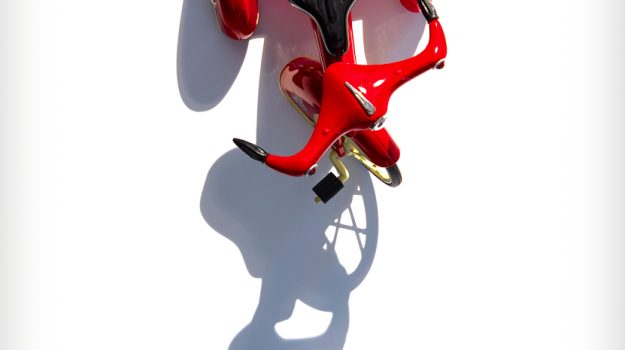 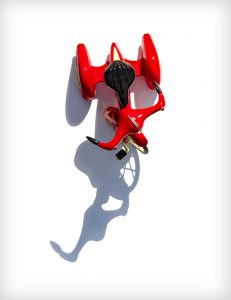 These tricycles are for beginners which is how I felt today. My goal was to give this object a grandiose life by surrounding it with a gallery white space and a strong shadow. That part succeeded, but then I spend 4-5 hours trying to make it into something else, in photoshop.  I did a full cycle and ended where I started. 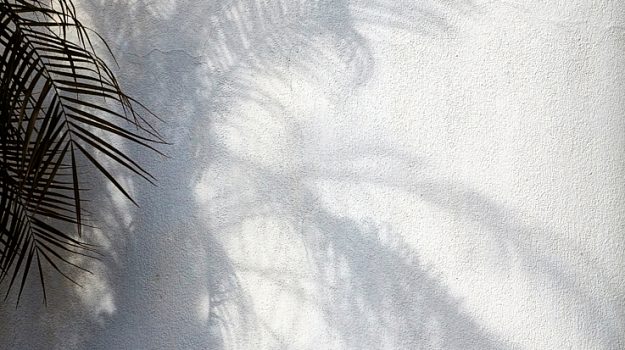 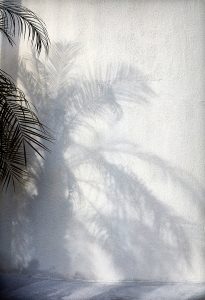 Seductive & sedative qualities of shadow aberrations, captures my attention. I only show you here a split moment captured, but with a little time and a little wind you might as well put the camera away, pull up a beach chair and enjoy the show. Unfortunately, or not,  there was no wind that day. 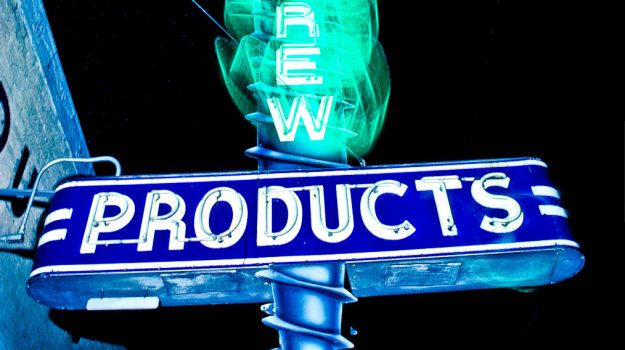 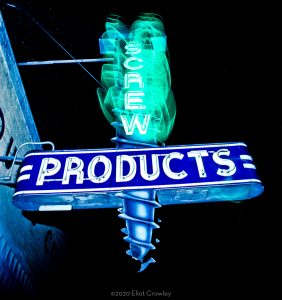 I have planned on playing this image numerous times but have always chosen something else when it came time to pull the actual trigger. But today is just seems right. Yes, from my files, deep in the files. I was in Texas visiting a friend, I think Jeremy Green was there. We decided to go out that night to see what we could see. I had a flash with me when we ran across this business, Screw Products. Only the neon on the screw part was working. Noticing that, I shook my camera with a long exposure while the flash captured the rest of the scene. I have always had a soft spot in my mind for this shot, because of the time and place. 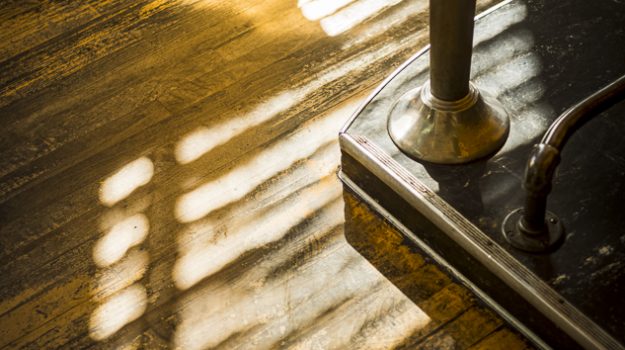 For as long as I can remember the beauty of Venetian blinds have always been an attraction to me. As a memory in my childhood home in the ’50s, framed in a window casing, it’s horizontal slates are certainly imprinted on my infant psyche. While the lighting effects that are possible, with the simple twist of the rod, continues to hold my fascination as an adult.

The ability to control the direction and angle of attack of a light source provides a wonderful resource especially in the hands of a photographer – casting shadows and altering the direction of the light source all at your disposal.

Venetian blinds on any window always find their way into my photographs at some point if I spent enough time in a room. 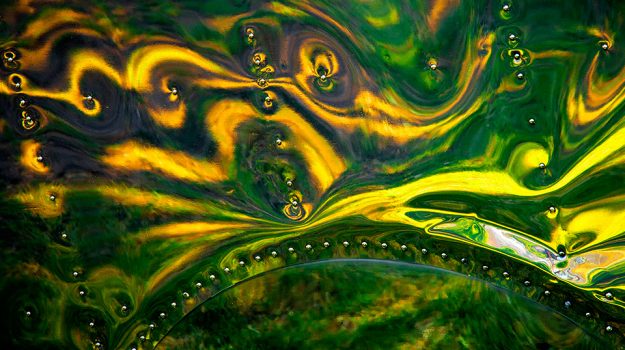 Reflections in a non flat surface brings to mind distorted faces and reflections of another world. I became fascinated with all the reflections and distortions of this image. One’s imagination can take off in many directions. These distortions lead me to memories and remembrances of movies seen as a young child. The bending of the lightwaves and their reflections can lead the viewer to a whole new fantasy of characters. With the contrast of a glimpse of reality through the curved portal to what appears to be a grassy area, to me had the feeling of standing next to Captain Nemo and viewing out of the submarine porthole from inside the Nautilus. But what does this image conjure up for you? 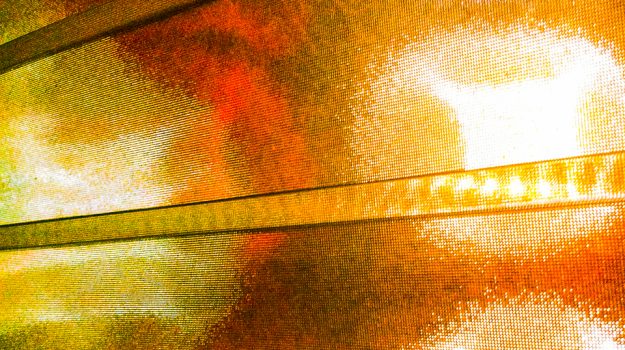 I had come to Hawaii for a commercial project shooting on the north shore of Oahu. My college age son along in a supporting role as digital tech. The opportunity to come to Hawaii a few days early to surf the gentle waves of the southern shores around Honolulu was to much to pass up – especially considering someone else was footing the lions share of the bill.

Arriving that night after our flight from LA we checked into a cheap room in a four story building wedged in between the skyscraper mega hotels that increasingly define the Waikiki strip. This old 1940’s motel fit the bill perfectly. Inexpensive, a well-stocked board rental shop on the first floor and a short city block from the beach and the easy riders in the shadow of Diamond Head. We settled in for the night. The alarm set early for our version of a dawn patrol. A wall of Jalousie windows filling one whole side of our tiny room. As I lay in bed with my son sleeping next to me, the buzz of the city was just on the other side of the thin louvered glass. The commercial lights outside dancing and blinking in the frosted glass illuminating the room.

It all felt pretty much perfect at that moment.

That’s the power of a single image. A simple picture that sums up a host of wonderful feeling felt one night years ago. A placeholder memory of a brief adventure between father and son. Time spent in the water. A funky old mid-century motel nestled in a tropical island city and the abstract colored glass wall that started our journey. 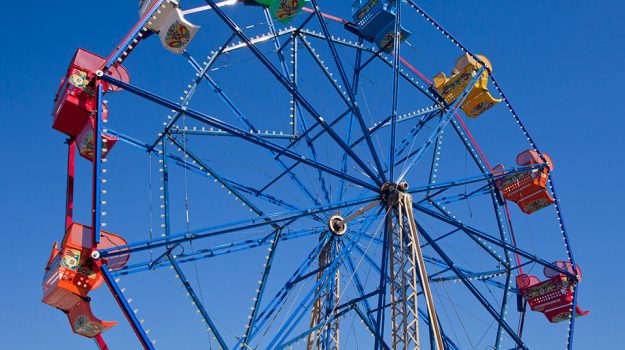 As a youth I spent a considerable amount of time with friends at the local beaches. It was the “The Thing to Do” and a great get away when you are a teenager. This weekend while spending time with my extended family and an out of town cousin at the Balboa Fun Zone, we came across the Ferris Wheel. I have not been to this exact spot for many years. Even though this wheel has been spinning since 1936, as a teenager it was only a number and at that time held no significance for me. While approaching the wheel and only seeing the tip top portion, memories started to flood my mind of days and nights of fun on this contraption. As the wheel spins around one can see Newport Harbor and the Pacific Ocean. Memories of friends that I am still in contact with to this day and some relationships that have faded with time. Memories are funny things, sometimes they seem to play tricks on you. As the wheel came into full view it appeared to me much smaller than I had remembered. In fact the whole area smaller and different than I had remembered in my younger days. Sure a few buildings and businesses had changed but the overall look of everything seemed to have a different vibe. Before I made my captures of the wheel, I waited for the Ferris wheel to be empty of riders in my mind all the friends of the past could be positioned in the seats.