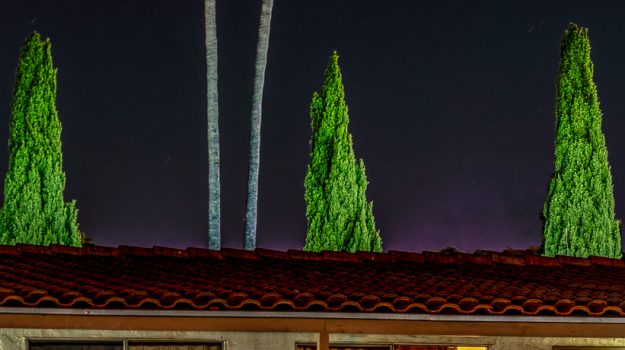 The trees at the motel in San Jose were foreign to my sensibilities, as was the coolness of the night air. Flying into California from central Texas last June on assignment, I was pleased to be away from the intense heat of home and spent some time gathering impressions with a camera mounted on a tripod. Even though I was still on central time and pretty tired, the graphic landscape and chilly air was stimulating. This image was made with some effort, shot from the swimming pool area which was locked up for the night. I got a motel employee to unlock the gate and let me in. The person in the window was not there. She was back home on a hard drive. 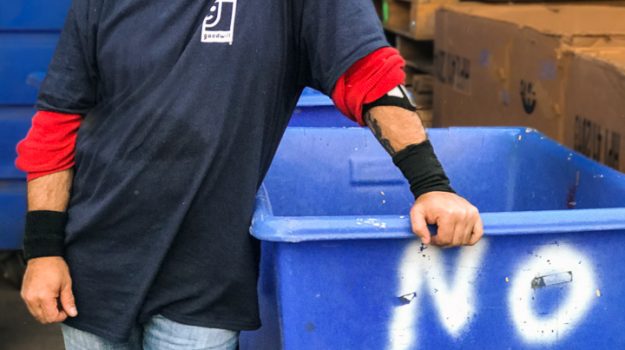 This portrait has personal significance. I have been mentoring this guy for about a year. I promised to stop by to see him Friday while he was working at what we here in Austin call the “Gucci Goodwill” due to the high caliber of goods donated to this particular Goodwill store. He was very glad to see me, and he was very upbeat. I was so struck by his joy and sense of well-being that I was inspired to quickly take a picture of him, and he struck a pose. In this case photography was a tool to preserve something personal…a fleeting moment that I wanted to hold on to. Oh how I wish that I had also photographed him a year ago when we first met, because the change in his physical and emotional status is remarkable. One man’s trash is another man’s treasure, and this man is a treasure. 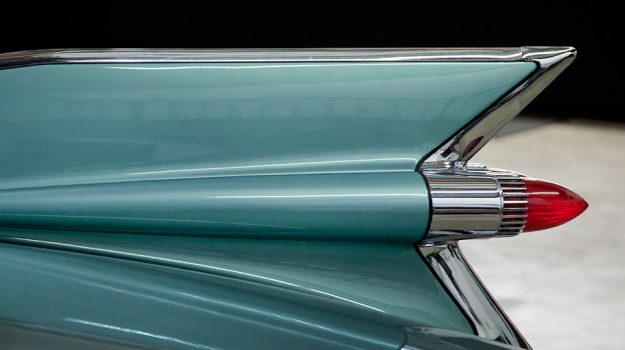 Yesterday I attended an Auto Show in my area of the new cars and trucks offered of all the 2017 models. This image is an extreme contrast to what I saw there. A 1959 Cadillac, one of the last of the big fins of the ’50s. At 42 inches tall this fin was one of the largest. The image was created while location scouting and normally I would not spend as much time as I did on making images of an auto parked off to the side, but the light, color and the quality of the paint drew me to it. The long fluorescent tube lights from above made the long narrow highlights and open shadows on the chrome and paint. The red color of the bullet taillights gives color contrast to the metallic green blue paint drawing one’s eye to the tail. The cropping and simple background added to the graphic feel of the image. I am grateful I looked further around the location and caught this great specimen of a Classic. I’ll be the first to acknowledge that not everyone gets my work. Alas, our culture is wired for experiences these days, I on the other hand, am wired for thoughtfulness. My orientation toward photography revolves around three ideas: Macro Observation – the search for underlying connections and currents in art and society. Intention – the willful visioning and purposeful execution in creating one’s art. Concept – thoughtful approaches to photography that are not encumbered by notions of beauty. This image would be an example of the later as it relies on typography for its raison d’être. Here, the application of paint identifies a location for a utilitarian purpose. I find more significance in this word and its placement than its original intent. The word “LOCATE” defines for me an awareness of where I stand, and quite literally says look where you are, perhaps also inferring some notion of disorientation. I also interpret it as a command to geolocate, to be distinctly aware of oneself on our precious planet, a mere mote in the galaxy. Again, “the search for underlying connections”. In relation to the nature of our Game format – one image following the next – I see yet another concept. A shift in visual conversation that brings us back from the abstract and literally grounds us into reality, the here… located right there. I often forgo playing a pretty or expected image when playing the Game for an opportunity to say something conceptual, this image on its own might be considered mundane to some, but in the context of the Game, I find it a fascinating idea that speaks to the macro as well as exercising the fundamental concept of the Game, the conversation and relationship between images. These nuanced ideas are what keep me interested in photography, sharing my personal and unique way of viewing the world. Its why I keep showing up at the Game, it affords me an opportunity to share who I am with the rest of the world. From distressed manufactured wood to the real thing. This and the preceding image for the Game struck me as uncanny in their similarities of color and pattern. I like the shift in subject between the images and yet they share so much in common visually speaking. While we as photographers tend to embrace “quality” light, typically directional soft light at either end of the day, this image breaks those rules by shooting with the sun directly over my shoulder. This type of light – combined with a long lens – has a flattening effect, stripping away conventional dimension and in its place, relying on color and pattern for contrast. I always shoot with concept in mind, however, this concept was not so much what I shot, but what I chose, these two different states of wood.
Posting....