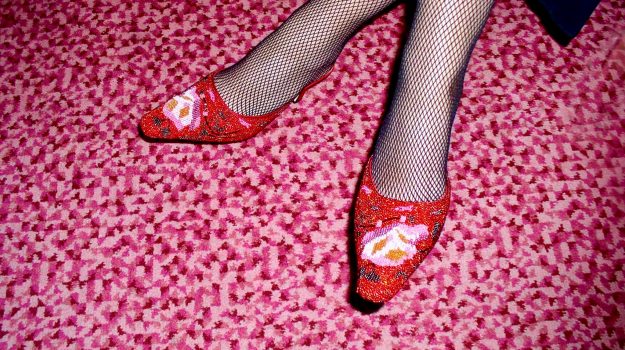 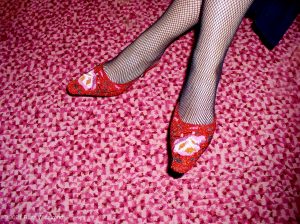 Flash on camera has such a bad rap – it causes red-eye, it is a flat and directionless light source – essentially it is stupid light.

However, certain situations benefit from this style of lighting. Such is the case with today’s image for our DPG project. My photograph has a simple, mono-colored scheme with a flat background, a perfect use-case for flash on camera. The sharp shadow creates a strong dimensional lift to the subject and the singular light source evenly illuminates all subject matter, giving it a very graphic feel.

When I first saw my sister-in-law’s shoes against this carpeted background, I had to photograph it. The red shoes reminded me of the ruby slippers from the Wizard of Oz, hence the title of the image. 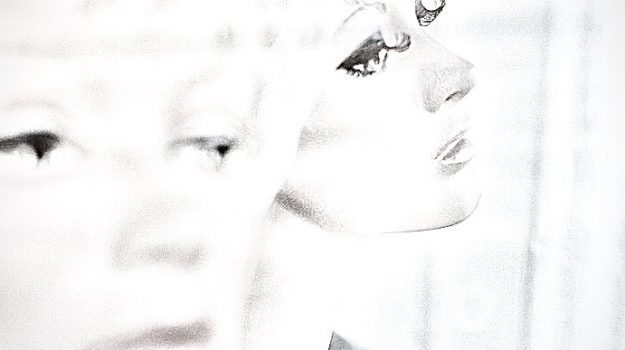 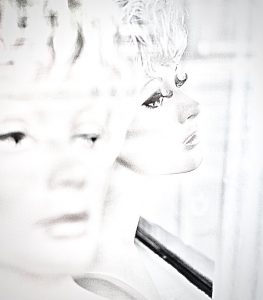 A couple of model citizens in a storefront window. Mannequins are a mirror into cultural preferences of the day as well as fashion trends, of which I could care less. I thought the side-glance between the girls that one was being judgy of the other. Everyone’s a critic. 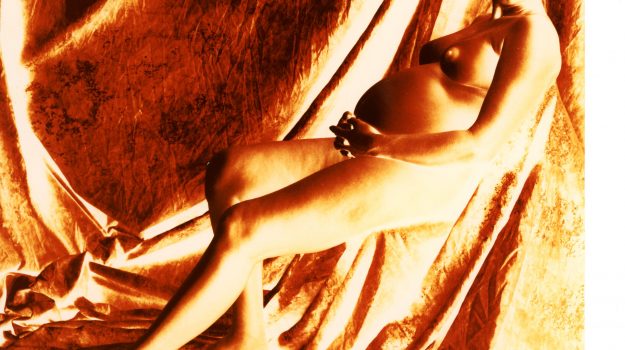 To continue the discussion, I happen to have photographed a model for female mannequins. The artist who makes these told me “D” was pregnant and would have to wait to model again. She probably is in the previous headless batch. “D” is at least 5’10”- or 5’ 11”. She was thin as mannequins can be. Once approved, (the original is done in clay, lifesize) “D” will be made into fiberglass molds and duplicated 1000s of times. Kind of like the Stepfford wives. We’ll end our conversation here. They may be listening. 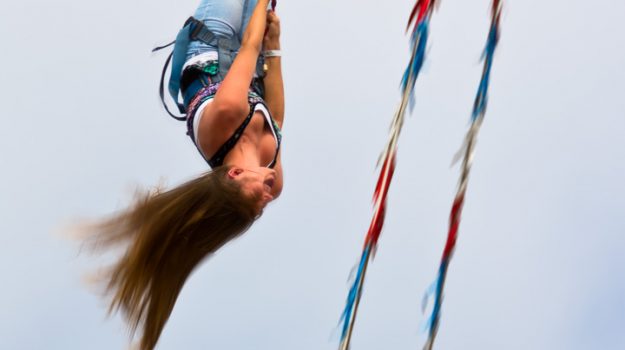 It’s almost summertime and that means the county fair opens soon.  I hit the various displays and animals, but look forward to the rides or in this case the thrillers. I watched several people jump and shot several, but this gal was apprehensive while in line, but she did jump, no pushes. I am sure the RUSH was something she will never forget.  Confession, I have never done this, but am tempted. Maybe this year I try it.

The Fruit of the Tree 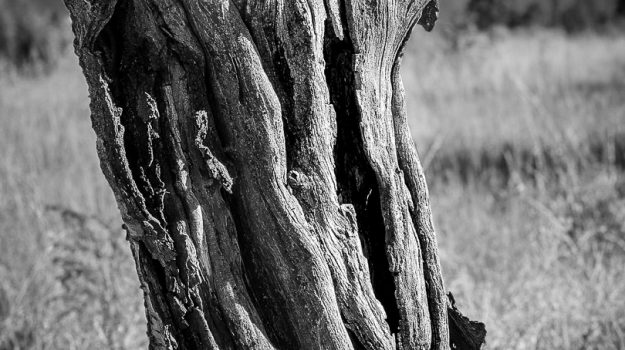 Our property in Montana holds many unexpected surprises for the curious photographer.

This tree caught my eye, its weathered and withered trunk jumped out at me immediately. The anthropomorphic body and arms held conceptual interest for me and its obvious physical attributes lead me to think of it as female. Ironically it is an old fruit tree, bearing further evidence of its once creative powers.

Time is well marked on this amazing piece of land, both natural and manmade. Its history is one that we cherish and add to in our own modest ways, knowing full well that we are mere temporary caretakers of a natural wonder.

This tree too was a caregiver for those who consumed her fruit so many years ago. Now contributing habitat for insects and animals as it continues its slow march to dust. As do we all. 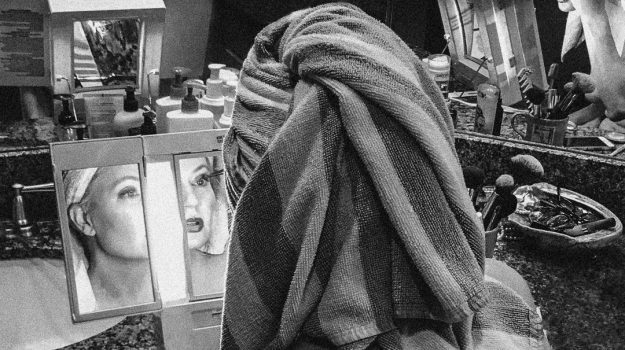 This scene was before me the other morning as I exited the shower. How could I not at least get my iPhone and snap a picture? Fortunately my wife is not new to my shooting pictures at any moment, and she tolerated my doing so in this situation as she continued on uninterrupted. While processing the image I tried out Lightroom Classic CC’s new color/B&W presets in the latest updated version and added some grain. The image took on a different feeling to me that I can’t define except to say that it reminds me of photography of some other era, like maybe the 1960’s. 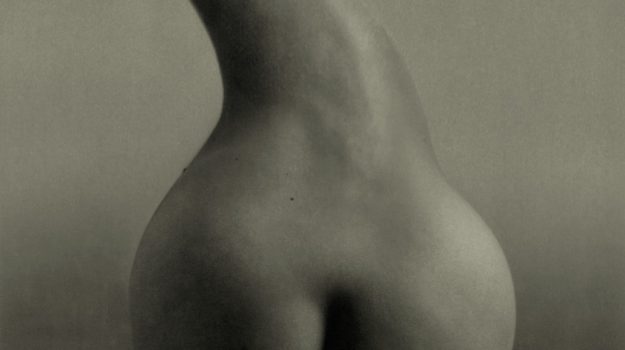 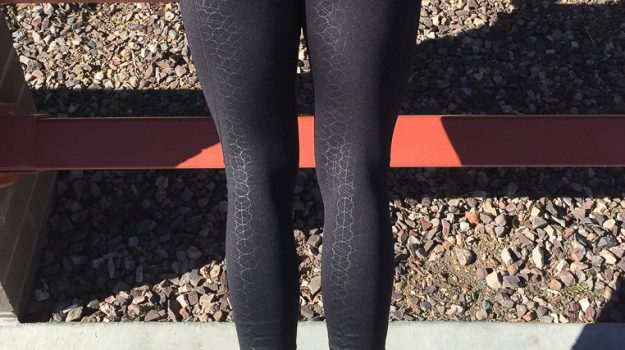 Often the role of a modern artist is to challenge the viewers’ expectations. This confrontation can take many forms… idolatry, notions of morality or visual perception.

What interests me in this image is not so much it’s sexualized appearance, but it’s uncanny abstraction. Do you see a woman here? Partly, and in that word we identify the narrative of the image.

Again, this is an exercise in visual perception, our mind populates a human form when in fact what you actually see in the photograph is not an image of a woman, rather a truncated form of two legs, devoid of humanity and objectified.

The image is a lesson in truly seeing rather than assuming, associating or even manufacturing information, something the human mind is exceedingly adept at.

Photography is a unique art form in this manner, twisting reality through visual perception, often confounding the two on the way toward really seeing. 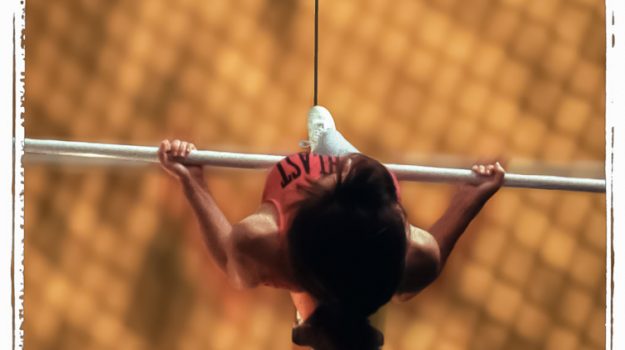 I made this image a while back with the phrase “walking the tightrope” in mind. When I made this image, I combined several images using props and when combined look believable.  The props used separately, wouldn’t seem likely in this setting. I decided to add the net below to give the shot additional depth and to soften the danger aspect.  By adding the slight motion to the model and the balance pole keeps the uncertainty of falling. 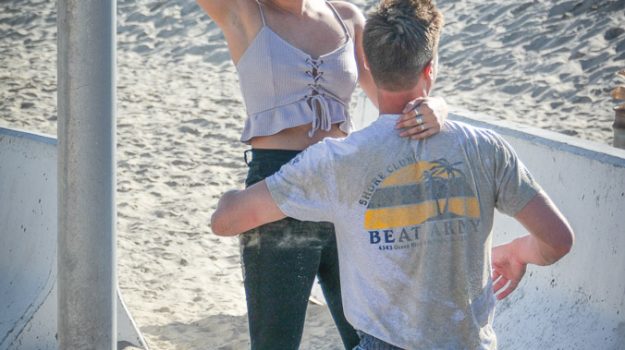 Watching people and life in general is something I like to do  especially on the boardwalk.  Beautiful days make even better shooting opportunities since it tends to draw a bigger variety of people.  With camera in hand down at the beach I sometimes pick a spot waiting for people to walk by or just walk looking around.  When I  bring up the camera to my eye, often when people spot me focusing in their direction, they sometimes react back showing off to the camera. This amorous couple illustrated by the sand on their clothing were in, lets say motion as I passed them.  After I passed, I turned and they were rising up and as I raised my camera, she spotted me shouting “Hey, over here!”.  Her reaction and lack of timidity suggests these two obviously were taking a break, feeling no pain from the party at the boisterous bar across the street. When out shooting on the street watching and waiting can offer opportunities and looking back can sometimes be even better.  Next time you take a walk, don’t forget the camera, be patient and to look back.