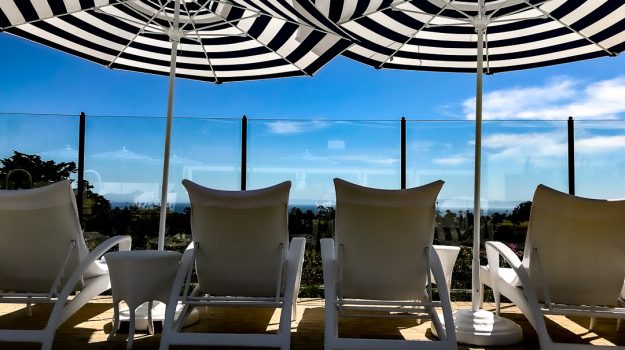 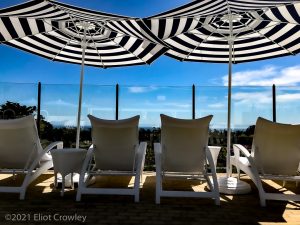 Ho humm. Another gorgeous day in Santa Barbara. Time to relax and let the sun filter through the stripped umbrellas, while I sip on a cool drink sitting on a chaise. Next, order up a sandwich to enjoy, but wait! What is this I spy? Now, I must get up and make a photo.  Even when chilling, I’m always on the lookout.

Fork in the Road 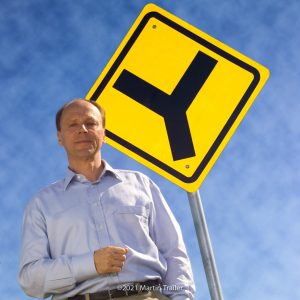 This was inspired by the poem by Robert Frost, “The Road Not Taken”. Two roads diverged in a yellow wood, And sorry I could not travel both And be one traveler, long I stood And looked down one as far as I could To where it bent in the undergrowth; Then took the other, as just as fair, And having perhaps the better claim, Because it was grassy and wanted wear; Though as for that the passing there Had worn them really about the same, And both that morning equally lay In leaves no step had trodden black. Oh, I kept the first for another day! Yet knowing how way leads on to way, I doubted if I should ever come back. I shall be telling this with a sigh Somewhere ages and ages hence: Two roads diverged in a wood, and I— I took the one less traveled by, And that has made all the difference.   Happy Fourth of July! 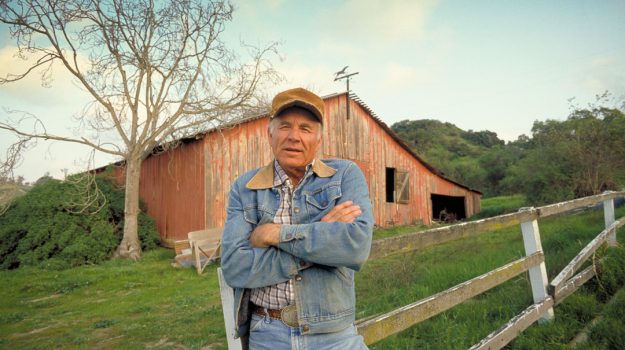 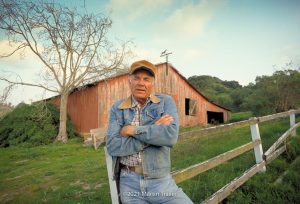 What does a bronc rodeo rider do, retired?  Just can’t live in the city, so buy a ranch and stay close to the agricultural life. There is always something to keep one busy on the ranch, but just a little slower than in the ring on broncos. 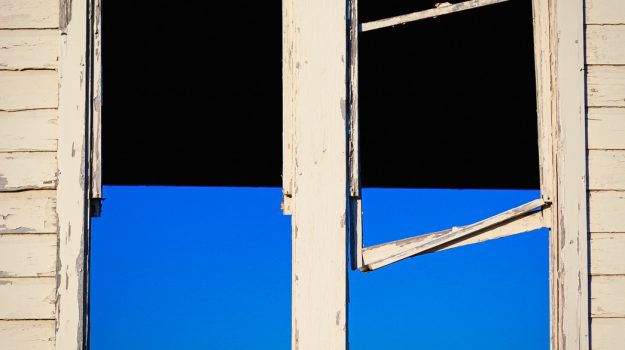 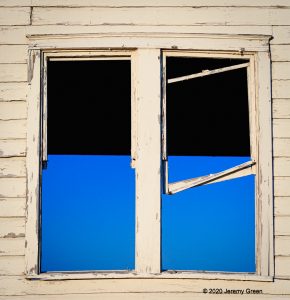 Exploration of an abandoned airfield hangar yielded the wild blue yonder looking back at me. In spite of trials and tribulations, it has been a good year for me. It’s clear skies ahead! 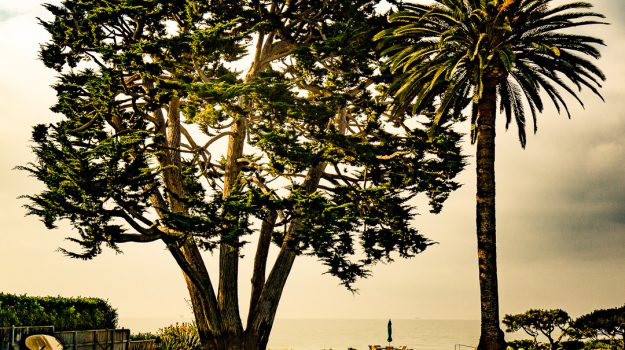 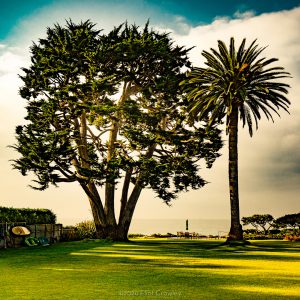 Golden hour has two times, AM and PM. I usually photograph the PM. But this morning the light was so perfect on these trees I had to pull out my camera. Scenic photographs aren’t usually my thing but when the light is right, you have to get it while the getting is good. And this morning it was good. 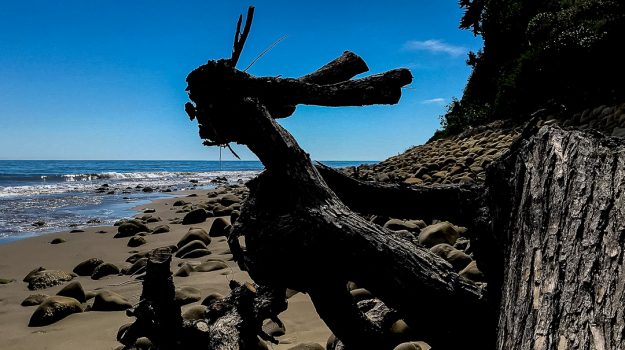 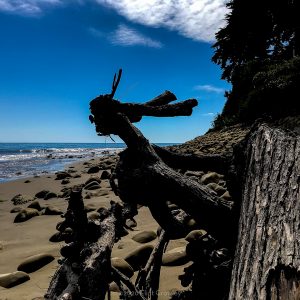 On one of my beach-walks the tide was very low. I was able to get around a point that frequently is inaccessible. That opportunity allowed me to go much further up the beach to an area where there is cliff on one side and ocean on the other. Very few people get to this place except at low tide. As I approached this dark figure, I kept seeing a woman’s face silhouetted against the blue sky. Do you see it? It reminded me of an old sailing ship’s figurehead. I imagine the rest of this poor vessel crashed someplace offshore and just this portion made it to land. She faces the sea on watch for her crew. 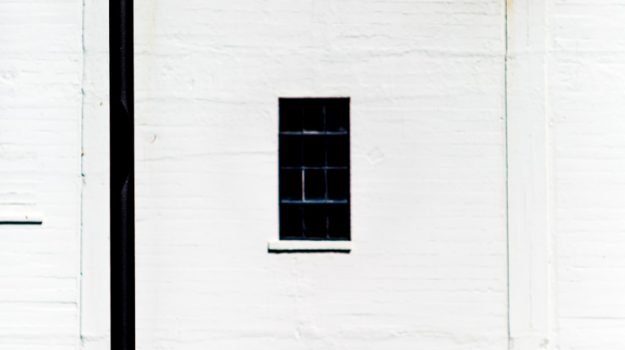 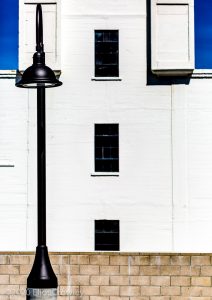 This was shot for the game. Just never played until now. Sometimes defense in a game is waiting for the right moment to strike. This is one of those times. I saw this, one day, while out shooting for something that might work against another image, I don’t remember which. Keeping it in reserve and reviewing it during this time of crisis I will make the play. I would have preferred making something new, something poignant, something important, but alas, I am staying home, staying safe. As an artist I feel handcuffed, afraid to go out to do the comfortable interaction with people I am so accustomed to, so regular with. Instead I didn’t leave my property today. I didn’t pick up my camera today. I don’t feel like an artist today. My work is with the people. And I cannot do that. Frustration for me is everywhere.

War of The Worlds 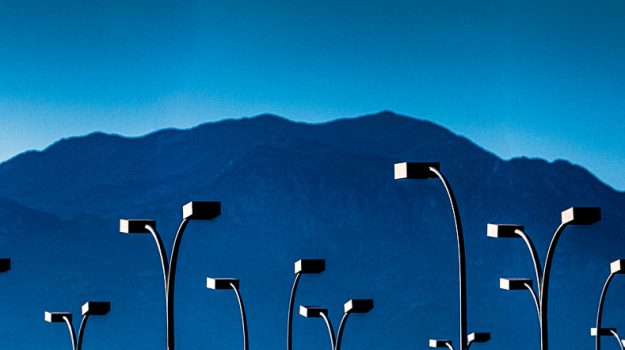 Eliot Crowley “War of The Worlds

Abstracting reality, changing perception of something to create more question is my favorite kind of photography. Lee Friedlander was a master of this kind of thing. It may have revolved around his penchant for including something of himself in many photographs. Lee would include his shadow or reflection of himself, as kind of a signature. His urban “social landscape” photography influenced a generation of street photographers. Including the oddity of something available like a street sign or some other symbolism was all part of his process. I would be hard pressed to say my photograph is an urban social landscape in the same way. I might call it an abstracted urban landscape. Instead of including the clues a viewer might need to find their way around the narrative of this image, I used active framing to eliminate information, changing the story to something else. Like taking a “normal” scene and turning it into a modern-day War of The Worlds scene. An army of aliens looking down onto the earth searching for the heroic survivor. In reality I am at the Indian Wells Tennis Garden. There they have lots and lots of tennis courts, side by side, that can be lit by these shapes. This panoramic view was stitched together by Lightroom’s algorithms from multiple of shots made with overlapping sections. 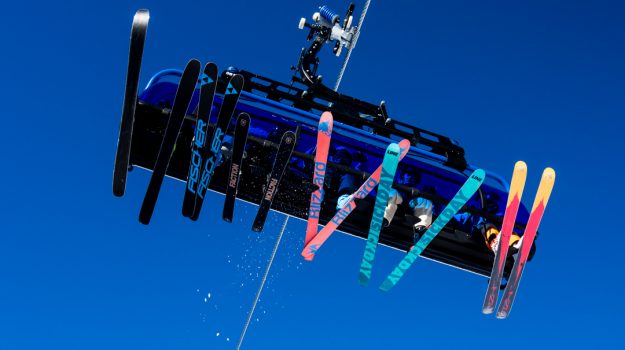 There is a new chairlift at the Big Sky Resort, an 8 person chair, heated seats with foot rests and a blue bubble to protect the skiers from any weather that might be uncomfortable. It was pretty amazing to get onto the chair because there is a moving carpet that puts the 8 skiers into the correct position for the pickup by the chair. Getting to the top negotiations had to take place of those who wanted to go left and those who wanted to go right. This day was a bright blue day, but these skiers had the bubble down anyway. It looked so odd to have all that blue and then 6 pairs of colorful skis I just had to take a photo. When I ski I carry a Sony AVCHD camera. It fits in my jacket pocket and is easy to pull out just incase there is opportunity. 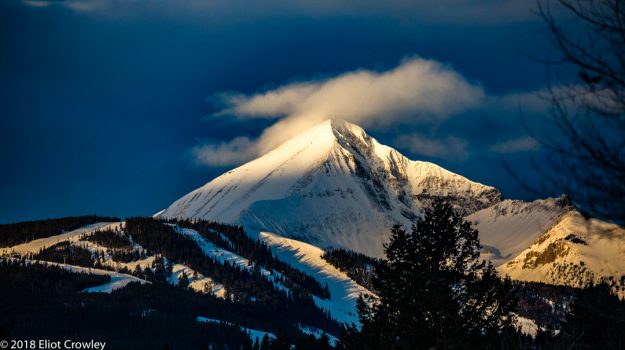 I woke up to this sight right out my bedroom window. The alpenglow at this time of the year on the snow capped mountain there is stunning. I only had a few moments to make the image, not only because of the fast moving line of sun down the mountain, but also approaching clouds from the east which blocked the sun shortly after I made my exposure.  Some work in Lightroom was the only thing needed to push the drama of this photo. darkening the blues and aquas, lighting the yellows to give more contact and definition of the ski runs. I love the cloud which seems to be smoking off the tip top of the mountain and the jagged shadow line of the trees on the largest ski run. Those were the things that attracted my attention after the morning light woke me up.