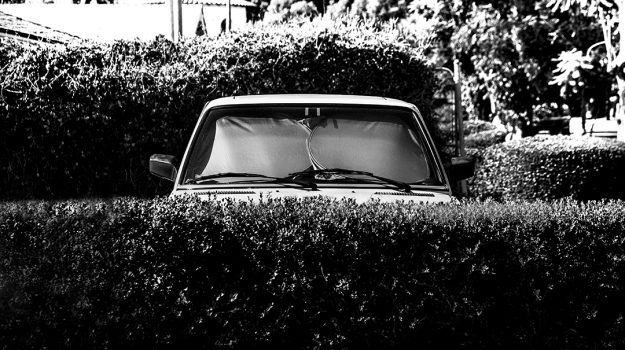 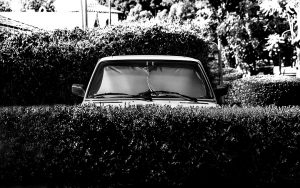 I was taking a break, having a cup of coffee and standing looking out the open back door of the office building for some fresh air. From this viewpoint there are hedges visible that break up the parking lot with some flowers and a tree that are just out of frame. It was a weekend and I was the only one around. A lone vehicle and the surrounding shrubbery became my personal visual playground. I liked the juxtaposition of the automobile and the hedges, the paint of the car smooth and white, the shrubbery being dark and very textural. Walking back to get my camera my thought was to create this image in black and white. While framing I lowered my point of view to where the hedge was below the windshield wipers, so just the green house of the car and a thin slice of the hood were visible. At this angle I found a bit of humor as the vehicle appeared to me to be hiding amongst the foliage and at least partially concealing the make and model of the car and peaking over the hedge like a nosey neighbor. I have plans to return to photograph this again in the evening and see how the parking lot lights and the adjacent streetlight create a completely different scene. 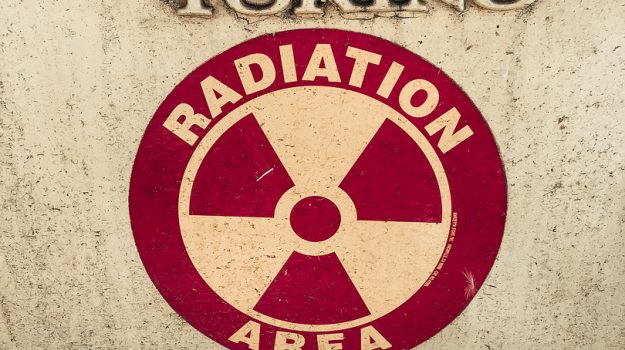 I come across these pieces of signage and typography and I can’t help but make a photograph of them. It’s their quirky absurdity that captures my attention and holds the attraction for me.

This image was photographed on one of Portland‘s most highly decorated cars… ahem. And what I mean by that is that every square inch of this car has some glued-on graphic, typography, or flaming doll… whatever. I’m sure there must be a kitchen sink somewhere on the vehicle.

For me, the attraction is the declaration that “photography is prohibited“, followed a little too closely by the sentence “use of deadly force is authorized“. After that, I’m not sure what else to say. It’s such an perverse juxtaposition of ideas graphics and threats… surely attesting to the personality of the car owner.

I’ll even go as far as to guess that there’s likely to be a nuclear half-life to this particular vehicle. 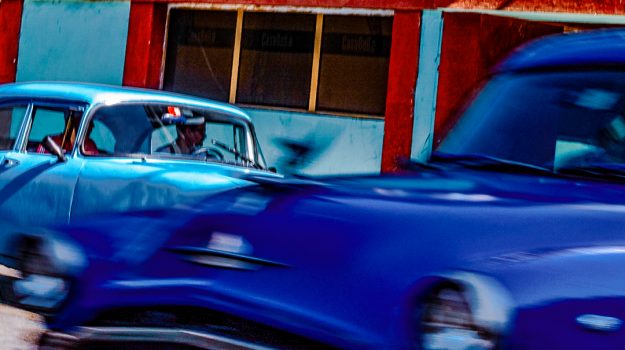 Walking the streets of central Havana with a small camera was a delightful exercise in intuitive street shooting. Everything was old and decrepit but new and moving fast. For this photographer it was like a trip to Disneyland with a Saul Leiter influence. Fleeting moments were constantly presenting themselves, not to be repeated. Only later in a cafe with a cup of Cuban coffee and a cigar could I review what had taken place. Glad I went. 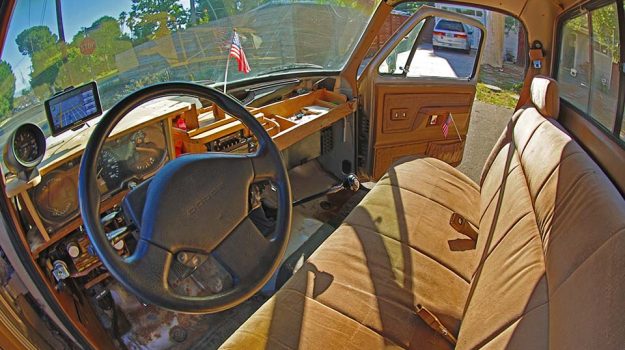 My brother is visiting from Northern California. In the American tradition of independent thinkers and tinkerers, it did not surprise me to find that he made his dashboard on his 1992 Dodge D250 Diesel truck. “Is it legal?” I asked. “All you need are seatbelts in the interior,” he said. “The police have stopped me and thought it was a stolen vehicle.” John said. “ The speedometer went out and I put in the GPS and slowly as stuff broke, I replaced the part as I went along.” As we approach July 4th, flags and colors start flying in our skies, and I thought of doing this image as a way to honor my brother’s independent spirit and love of wood. 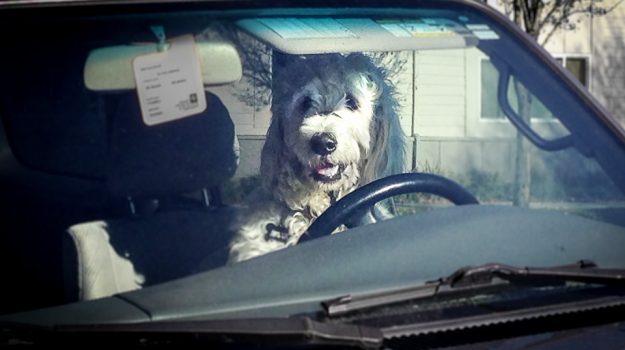 Every once and a while ya just gotta have a laugh. 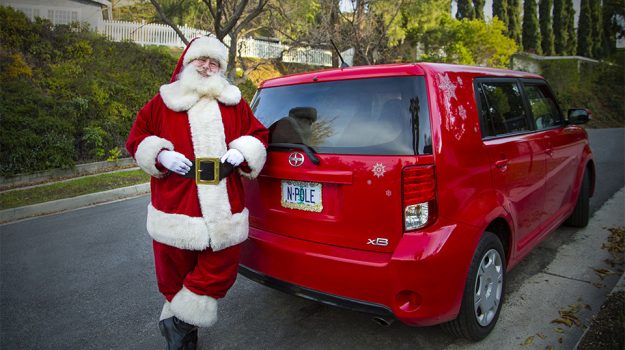 Today as we were packing the car to go to our family holiday dinner, out of the corner of my eye appeared a jolly white bearded gentleman dressed in a plush red and white suit. He had just pulled up to entertain at a neighbor’s party and since he was a few minutes early agreed to pose. At this time of year it is possible to see more than a few “Store Santas” as we are shopping but this gentleman not only looked and dressed the part he had a very red sled with the coolest license plate that read “N-POLE”. Once again, I was rewarded with always having my camera handy. PS – I did ask if he was the real deal; he informed me he was. Bright sunny is not always what the photographer is hoping for and this morning I was fortunate that a marine layer had arrived after a few warm and cloudless days. Weather conditions such as this make for more interesting images and here the early morning fog helped by reducing the clutter in the background and emphasizing the action in the foreground. In this case it also helps the viewer understand some of the story, like the time of day, a clue that tells us that the young bicyclist is probably on his way to school.   This was just one of over 100 images I made this morning for this post and judicious editing was an important factor in making my final selection. With street photography the photographer does not have control of the action as it plays out. But he or she does have choices to make as to where to position the camera for the best point of view and use of light, how to crop it, what camera, lens, f-stop and shutter speed to use and when to push the button. I choose this particular image not only because of it’s flow, balanced composition and fact that the subjects were caught mid-action, but because all the elements in the frame worked well together to tell the story. For me there were no other additional props (cars, trees, telephone polls, other pedestrians) needed, it contained just enough to tell this story. Whether it’s the circle of Life, grab the ring, that rings true to me, get in the ring, the form of the circle is one of the oldest glyphs known. When 4 auto companies in Germany merged to form what became known as ‘Audi’, the management chose the symbol of these four rings to represent the heritage of the firm. I love abstracts and I love circles. Here we are. Super Bowl Sunday. I thought the preoccupation with cars in the game could use a different direction. I like cars as much as the next guy, perhaps less than my fellow gamers. But I am less interested in them as the showy display of shiny metal and power. For photography, I like them as concepts, so my take on cars leans toward the pop art side of the spectrum.
As is my way, I awoke thinking of how I would respond to the previous image in the game… cars,  toy cars, shiny cars, I fell back to sleep. Hmmm, I thought as I awoke, instead of more shiny cars, what about crushed cars. I liked it, so the hunt was on.
Luckily it was a stellar day here in Portland, and Google helped me find some likely areas in North Portland to go stalk the wily and elusive crushed car. And elusive it was, remember, it is SuperBowl Sunday, no self respecting owner (male) of a metal salvage yard is likely to be around on a Sunday, especially not on SuperBowl day. So again I am left with guerrilla photography, sneaking into wrecking yards and making pictures. I felt 20 years younger, HA!
On one particular felonious adventure I had to actually climb over a 7′ fence topped with razor wire. There was an wall next to the gate that looked like I might be able to climb and squeeze through. Sucess. This is where I made my picture for today’s game. Wisely enough I was shooting constantly in the first 5 minutes, knowing that I could be busted at any minute.
Sure enough, a security guard showed up in 6 minutes and politely asked me to stop shooting. She was nice enough about it, and after explaining our visual game of telephone, she smiled and said “cool, but you still have to leave”. Thankfully, she unlocked the gate to let me out as I exited, no climbing involved.
The resulting shot was pretty close to what I had envisioned, though in playing with it in Lightroom, I messed around the Camera Calibration panel and was immediately drawn to the pop colors that came out. There you have it… “Pop Cars”.
As always feel free to share, comment and like. Russ Following an older cop with a donut. Hmm, well my first thought was cop, rearview mirror and speeding. In my teen years I had quite a collection of speeding tickets.   Once, trying not to be late, I got another on my way to court. My lead foot is much lighter now, but I still appreciate a fun car to drive.  Depending on the vehicle, I will push it especially on country roads. This 1956 Porsche Speedster is showroom fresh, beautiful and a thrill to drive, though with the $300k  price tag, it is slightly intimidating.