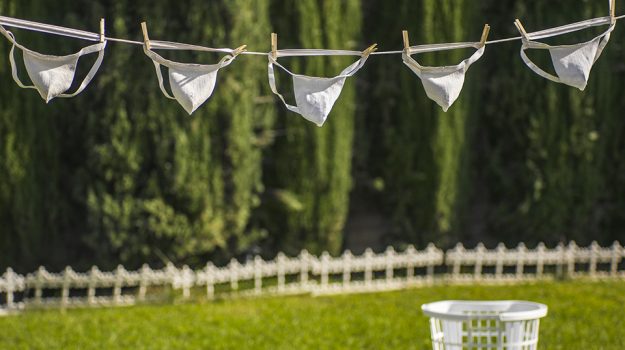 Self-Assigned projects fuel my photographic soul. The genesis is always writing, or what I call ‘scheming with words’. Once a thematic direction has come to life, I begin to visualize the images. Not the other way around! This is my process and reflects the fact that my career and journey as a photographer and filmmaker emerged from a not quite developed persona as a writer. That’s a story for another day…This an outtake from a series created as part of a direct mail campaign based on scents, and the overall project was called ‘Scratch and Sniff’. Before you go ‘there’, please know that the aroma brought to photographic life here was ‘Baby Powder’. Chafing and all that. I worked with a stylist who found the over-sized underwear that we hung in the breeze. The backyard of a typical LA tract house provided the environment. I believe the official name of this gear is ‘Athletic Supporter’, although there’s another slang term that became the moniker for accomplished athletes in general. You probably know what I’m talking about. No fabric softener needed. A few weeks back while playing defense I took advantage of the Amgen Tour of California passing right in front of my house. I went out there with a strobe light with an orange gel on it and a 500mm Nikor f5 lens on my Sony NEX7. I set up so my shot was at the peak of the climb where I hoped they would be going just a little more slowly. Anticipating they would be coming over the top on the right side of the road I set the camera and light for that area. I don’t know too much about cycling, so when they came flying over the top on the other side of the street I quickly had to shift my lens which is very hard to focus with that camera. Since the lens in only an f5 lens there are no other choices for through the lens adjustments, I just started pushing the button in the hopes I would get something. Recycle was also a problem. The light was working off a battery pack which slowed down everything, except the cyclists. Of the 20 or so shots I made in the few seconds it took for them to pass in front of my house only this one was acceptable. But I think it is more than acceptable and after all, I was looking for was just one, for the game.
Posting....