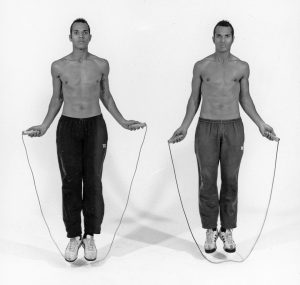 Being an identical twin, I’m naturally drawn to photographing them. I find it very interesting to study their faces and find similarities and differences if possible. I’m a “mirror twin” because of some of my features, for example, the way my hair parts and the way my smile slants down to the left is a mirror opposite of my brother’s. In this photograph there is scant evidence of these twins being “mirror twins”. Both of their right ears are slightly lower than the left ears. Their musculature is pretty identical. One feature that can be evidence of the mirror effect is their eyes. The twin on camera right has a more open and slightly lower right eye than his left eye, whereas the twin on camera left has a more open and slightly lower left eye. I was amazed by the synchronicity of their movements during the shoot/workout. They handled the speed rope exactly the same, and were able to jump and land at exactly the same time. It was shot in a cove, hence the uniform background. Technically there shouldn’t have been any shadows, but I actually enjoy the intersecting shadows. They create yet another example of the symmetry and connection with these brothers.