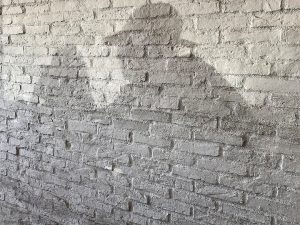 One afternoon I decided to catch a late lunch at one of my favorite places. There were not many people eating at this time of the day so I had my pick of tables. I chose the table nearest the wall in the back corner of the restaurant. While waiting for my food order to be called, there were a few minutes to check email on my phone. One of the workers raised the drapes on the large floor to ceiling windows to let in the afternoon sun. Looking up I noticed the sun had cast a shadow on the wall nearest to me. A man in a hat with his young daughter became a silhouette on the white painted brick wall. I was delighted with the shadow on the texture. Quickly switching to my camera in the phone I made a capture of this scene. Moments later the couple changed positions and the shadow was lost. No fancy equipment, no big camera, just an image that brought me pleasure, a true serendipitous moment.

Thank You, One of those moments that drives me to keep creating new images.