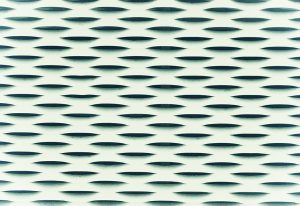 I was driving down a side street one day and spotted this metal grate on the side of a building. The irony is that there was a doctor who had offices there and I had been in the parking lot too many times to count over the years. This was a Sunday and the area was void of cars. I pulled in and began to photograph these shapes. I’m a fan of repetitive patterns in general and there was something different that at a glance did not reveal itself as first. As I began shooting it hit me! These odd shaped openings looked like Eyes and Eyelids! They are mounted on the exterior of the building for decorative purposes only. Feels very mid-century modern or at the very least not 2021. I added the pastel hue to honor that heritage. In my imagination this image is hanging on a wall somewhere in a Palm Springs home with a view of the pool nearby.