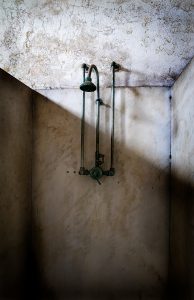 While on a small group guided tour of Ellis Island I was mesmerized by all the visual history that was displayed in the old buildings. This whole area is planned to be kept in “suspended decay” and not scheduled to be rebuilt or redone in any way. So texture, aging and decay was everywhere one looked. I payed no attention to the tour guide as she keep saying “Keep up with the group, we wouldn’t want to lose anyone…” which I had a strong feeling had been directed at me. I kept lagging behind the rest of the group to make images of what I found of interest to me, staying a bit longer in a room to frame and create an image. Down a long hallway that opened up to a shower area I saw this one shower stall. I could almost not wait for the group to clear the area and go into the next room so I would have a few uninterrupted moments to capture an image that I felt was just waiting to be made. The light in this particular area was coming through a large high window and bouncing off the light colored plaster ceiling and falling across the marble enclosure. I had first spied the unique shower pipes and the mixing value and I enjoyed how the light cut across the plumbing at a diagonal  angle. The texture of the cracked plaster walls and the marble created a contrast for the emerald patina on the shower’s plumbing, appearing  jewel like to me. This area was dripping with history as I pondered who the people were that had used this room and washed off the dust and dirt of their previous lives, what might be their dreams and hopes for a better life as they came here to this new land. As I rejoined the group in the next room I wondered if anyone of them had relatives who had passed through these buildings, I know I have a few who did.

5 Comments for The Shower

Superb image. But in the sense that it induced a bit of a chill bordering on the macabre. Love the light, its almost always about the light, isn’t it? If all the tales this shower stall could tell…which in many ways it does.

Appreciated Sal, There was defiantly some residue of emotions in that room, fortunately the light play and texture kept me focused….

Message*Very Nice Robert! Love the subtle colors, the light coming from an unseen window, and the drawing feeling of the image. Not my turn yet but I starting to get vigor-rated!

Thanks David, It was one of those times when it spoke to me loud, I’m glad I listened….