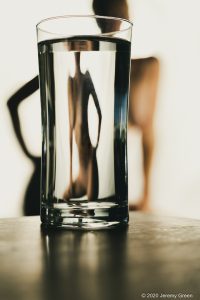 The late 1950’s into the 60’s was a golden era of magazine publishing, and Esquire was an iconic “men’s magazine” that was cool and even a little racy. It was a time when writers, photographers, and Mad Men pushed social boundaries in such slick and weighty monthlies. The mid-century modern world was emerging from the gray post-war straits, and I was emerging from boyhood towards manhood. Perusing a fashion photography book a while ago, I happened upon a Harper’s Bazaar cover from 1959 that inspired me to try shooting a feminine form refracted through a glass of water. Like Bert Stern’s pyramid refracted in a martini glass for a Smirnoff Vodka ad of that era, this image reminded me of those magazines and those times.