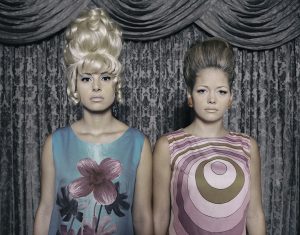 This image is an outtake from a series I created, before the term ‘Personal Work’ was being tossed around. This came to be, because I was feeling stuck in my career, and during a Tequila fueled dinner discussing potential concepts (which went on until the next day), ‘Beehives’ was born. We had quite a few different scenarios, and those which require a ’vintage’ look were captured in a home here in LA. It was like a time capsule. The owners were retired actors. Knowing the value of a great location, they had preserved every detail of the house just as it had been when they purchased it in the 50’s. I directed the subjects to express a certain ‘ennui’, and they embraced that attitude with finesse as you can see. I don’t have the ‘in between’ shots anymore, but I remember a great deal of giggling and levity all around.

Always liked this one Bob.

Thanks Russ! Let me know when you want to have that phone call.