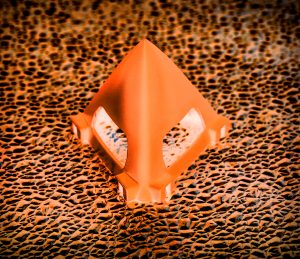 There is an old Chinese proverb, “A journey of a thousand miles begins with a single step.” Have you ever started a journey and did not end up where you thought you would ?  That is how today started out for me. I began to work with one concept in mind for my visual offering for today and ended up somewhere I had not expected. I found myself playing with a painters’ tripod or what some call a painters’ pyramid, used for propping up items to help with coverage when spray painting. Working with different light and backgrounds, playing with the triangular shapes, trying several arrangements with multiple triangles I rested on just one single piece. And after bringing the capture into processing found some new avenues or rabbit holes to go down. I found in this image many different shapes other than only triangles, and the non expected colors appealed to me. I enjoyed placing the smooth item on a textured background and the way it stands out against the texture. The image began to take on the look of a helmet or a mask. At this point I stopped, any more manipulation would not have added to the image, any less would not have created the look I came to desire. So glad that I listened to that little voice and tossed the original concept, choosing to go down what I thought was a rabbit hole that became an enjoyable, experimental journey.