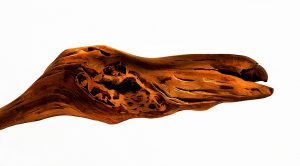 With the advantage of controlled light in the studio I played with this section of driftwood found at the beach off the north coast. After looking at this piece of wood for some time I decided to just play with the light and texture and see where it would take me. After some time of noodling the light the wood started to take on the look of a museum artifact. I kept going with that direction in mind. I began to see something like a prehistoric skull taking shape. With some research I found this image appeared to be similar to a Psilopterus, a bird that some Twenty plus million years ago flew around the skies of South America. I enjoy the clean almost clinical look of this image. I have worked quite a bit with driftwood pieces, eventually they take on some kind of personality all their own. I named this one Phil.

Right off the bat, one thing was plain as daylight: it resembled the skeletal beak, more like the lower mandible of some prehistoric creature, a bird to be exact. The burnt-sienna glow gives the impression (to me atleast) that it breathed fire, a fire frozen in time.

Only then did I read your narrative, which as always, is as interesting as the image. I guess I was not far off. Scary!