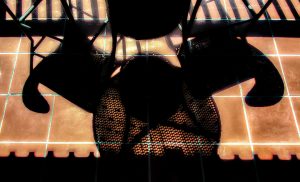 As the sun moves toward the West, they come to life. The dance begins around 2pm, and continues until early evening when they gradually disappear. I chose to title this image in Spanish to reflect the architectural cues which surround me where I live. My address is on ‘Catalina’, the building has ‘Vista’ in it’s name, and all this in the city of ‘Redondo’. I processed to exaggerate the textures and patterns, tweaking the color, contrast, and adding some ‘glow’ to create this rendition of  ‘Shadow Play’.