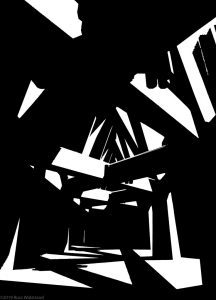 While a Ansel Adams was busy expanding tonal ranges in his work through the Zone System, I was headed in a different direction. The reduction of tonal range. This image is another in a series of early work created with Kodak’s high contrast copy film in leu of normal Tri-x or similar. This 35mm film essentially does not record any grays, and if shot in sunlight what you receive is pure white and black tonality. This is a photograph of an outdoor atrium along the perimeter of San Francisco’s TransAmerican pyramid building shot in the mid 1970’s. The light plays well on these structural elements repeated as they fall away into the background. This kind of experimentation in high school launched my career in alternative processes which subsequently led to my adoption of digital imaging in 1990 and the rest as they say, is history.

Thanks Blue. Nice to hear from you. As I recall, a strong formula of Dektol was used.