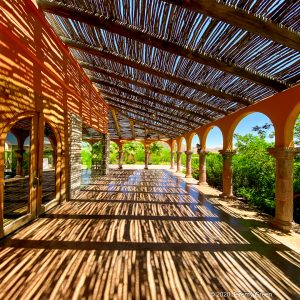 In the southern part of what was loosely defined on 19th century maps as the “Great American Desert” and includes the Big Bend region of Texas, the intense sun is broken but not entirely blocked by laying sticks along vigas (roof beams) of verandas, allowing some sun and some shade. It’s called latilla, and it’s a necessary contrivance. The shadowing has been an attraction to me wherever I have seen it, but I had not been able to divine a decent picture of it before. While waiting for my lunch at a fancy hotel restaurant a couple of weeks ago, I shot this with my iPhone 11 Pro Max which has an extra wide angle lens. It’s a feature of the phone’s camera that I have rarely used, but this was a situation that was right for it. My extra-wide lens for my 35mm camera was left behind many miles away. This was reason enough for me to have gotten that iPhone.

It smacked me too Deb.