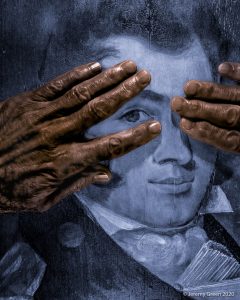 The decision last night was to do something with hands for the Daily Photo Game: hands folded, a hand holding a smoking cigar, then hands in a portrait. That followed the game better. After arriving there the stream of consciousness and intuition took over, resulting in this image a long time later in the wee hours of the night. This is a single photograph shot with my camera on a tripod with a 5 second time delay and my own hands inserted over an ancestor’s portrait painting on wood panel, then the image was manipulated in Lightroom to a great extent. No amount of time in a darkroom could have achieved this, at least by me, and it’s marvelous. The painting is the same one I used in my play of 1/2/2020 entitled “House Guests.” The current buzz is “don’t touch your face” but that’s not where this idea came from. It has more to do with racial relations in American history and the sweet, loving relationship I have had with certain African Americans in my youth who helped raise me.