My take-away from Robert’s sweet image was the spiral twists of the red vines. We are in Montana, so my props were limited. However, I did rummage through some old boxes of rope and found theses two door springs, I thought I could make use of them somehow. After stretching the springs beyond their intended tolerances, I began to play with them in all kinds of configurations, clamping them to a rustic end table and adding a drill bit or two as exploration. The drill bits did not make the cut, and I ended up with the door springs alone. I really liked the play of the spiral shadows as they fell across the surface, transforming into straight lines from such a lyrical shape. Pretty cool. Good thing I got this shot when I did, seconds after I captured this image, the set fell over. I took that to be an indicator that I was done for the day. I have attached a shot of the set. 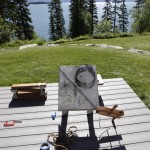