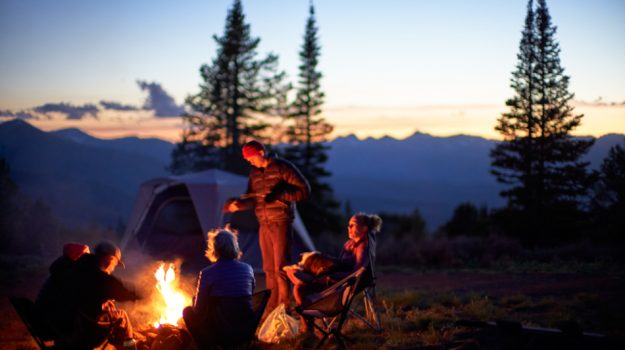 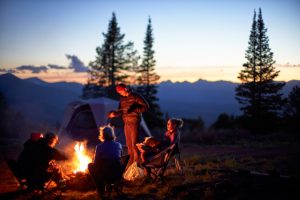 With summer fading and fall just beginning, the cool mountain air offers a chance to gather around an early evening campfire along a ridgetop.

Mixing two different light sources, especially ones as dramatic as a campfire and the other a sunset well past its brilliance, makes balancing the dynamic range between the two a matter of timing.

Much of this can be manipulated in post, but what’s the fun in that when the evening only holds hours around a campfire until long past dark. 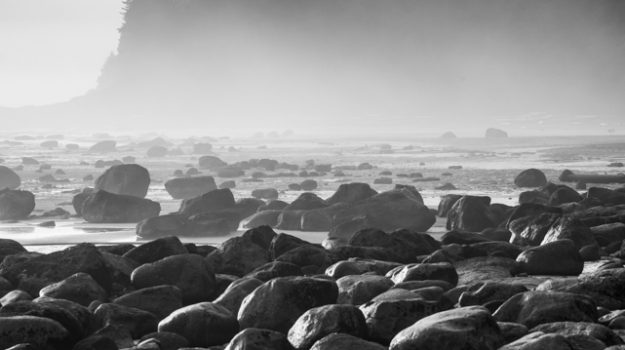 From distressed manufactured wood to the real thing. This and the preceding image for the Game struck me as uncanny in their similarities of color and pattern. I like the shift in subject between the images and yet they share so much in common visually speaking. While we as photographers tend to embrace “quality” light, typically directional soft light at either end of the day, this image breaks those rules by shooting with the sun directly over my shoulder. This type of light – combined with a long lens – has a flattening effect, stripping away conventional dimension and in its place, relying on color and pattern for contrast. I always shoot with concept in mind, however, this concept was not so much what I shot, but what I chose, these two different states of wood. On the road in Sedona, Arizona this week and as luck would have it I made this image of The Cockscomb Butte just yesterday. It’s been bright and sunny here all week with beautiful blue skies but yesterday rain was forecasted and I knew (hoped actually) that clouds would come and play. As predicted it did rain and the clouds did arrive in mass. All morning it was very dark and gray with no clue if the sun would break through. Patience paid off when for a brief few moments the rays of the sun made brief contact with the surrounding rocks and buttes only to disappear for the rest of the day. The Cockscomb is only one of many buttes in this area and was the only one that was bathed in light. This kind of opportunity can’t be predicted but I needed to be ready as the clouds were rapidly moving over the landscape and the light was right only for a few seconds. Patience, planning and luck are needed to catch these kinds of moments. Revealing the hidden might best describe my post for today’s Daily Photo Game. This shot, taken from a moving car, reveals that which is normally hidden, or that which someone hopes is hidden. The stroboscopic motion-blur of gaps in these trees is what unveils this clear cut in the forest. As a passenger in the vehicle, I was struck by the shallow curtain of trees that separated the road from the “woods”. Our leisurely drive gave me an opportunity to watch the flickering of a wounded forest, winking briefly in and out of existence as the foreground trees occasionally thinned. Like Oz says “…pay no attention to the man (clearcut) behind the curtain”. The ploy is revealed here and the Oregon woods are shown for their true nature, a patchwork of quilted rainforest, dotted amongst too many clear-cuts. The vista along the highway tries so hard to put its best scenic foot forward – pretty on the surface – but ultimately it is an illusion when one takes the time to really look. I like that Robert’s play “Liquid and Light” and my image share a flowing horizontal connection. But I am mostly intrigued that a similar visual form can present two very different subjects and editorial points of view, and still “play” well together.
Posting....