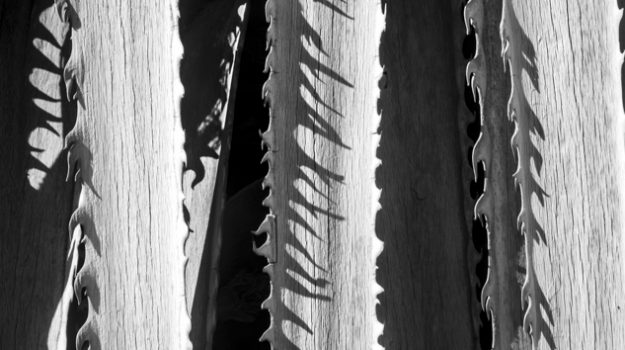 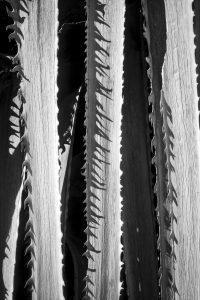 Wandering a seemingly empty desert landscape might initially present few options for photographic exploration. Over time, however, with some patience a whole world of opportunities presents itself. 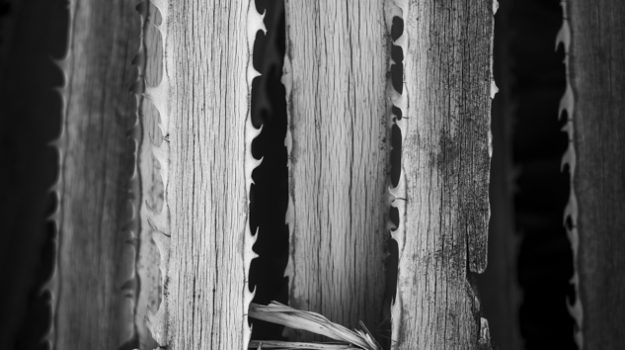 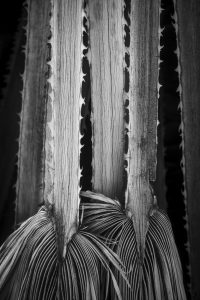 Spending a week desert camping provides a definite change of venue from a coastal life where the daily influences of the ocean permiates every aspect of life. This desert area was underwater millions years ago and the effects of water on topography is present across the entire landscape. Mountain canyons etched down to sand washes providing pathways for exploring deep into the baren expanse.

When you stumble onto a palm oasis it presents a visual relief from much of what you see for miles around. Palm trees struggling to maintain life on the limited water where occasional winter storms are the only hope for survival.

A cluster of dried branches provides a clue to life and death here in the desert. An annual cycle surrounded by thousands of years of relentless decay and change. A picture here capturing a millisecond of this process. One small glimpse into the otherwise endless march of time. 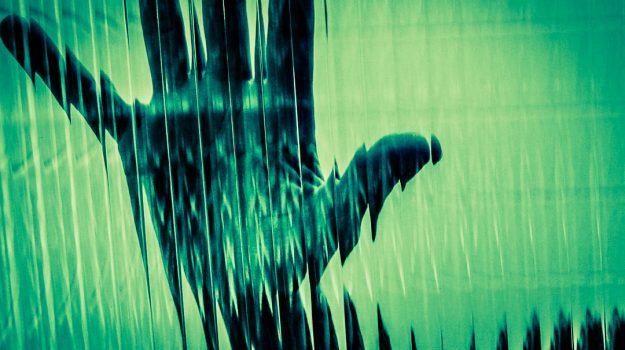 Finding an emotional read in an image can often be found with a tighter crop. I played with this image’s crop for a sometime and while the full image and technique were strong, it wasn’t until I cropped the image to 1/4 of its original size that I began to “feel” the image.

In particular, I like the way the bottom of the image began to feel like refracting trees, which made it seem like the hand was outside, trying to get in, rather than the shower stall where it was created. This twist of fate is something that I look for in my imagery, taking the viewer into an alternate reality, illustrating a feeling rather than depicting reality.

The image has a sense of desperation to it, truncating the tops of the fingers and allowing a tangency to occur at the left edge of frame helps to create tension and perhaps threat in the image. 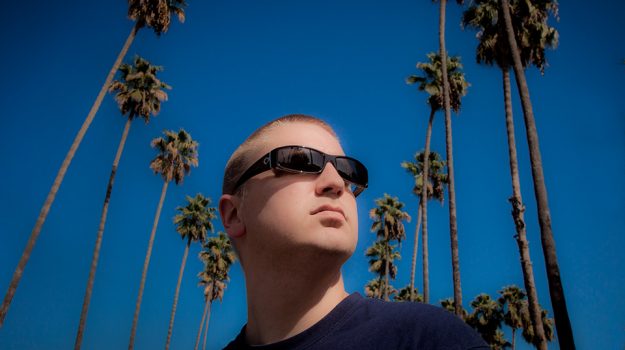 Our dreams can take us to places we would never think of in a normal conscious state.  Dreaming is basically defined as a secession of images, thoughts, or emotions passing through the mind during sleep. On this day my image is more like the essence of a daydream. The overall soft effect and warm color temperature of this image was cooked later in the processing. The objects in the frame speak to how in my daydream my wish to be somewhere else and even someone other than myself. Today I was daydreaming of being in the warm sunlight, as a version of my younger self, in a street lined with “Dr. Seuss” looking palm trees. The trick was to only include the objects that were in my daydream. Choice of lens length, direction the sunlight, wardrobe, along with the point of view draws the viewer to the person’s face in the image. This effect is reinforced by the “V” angle of the tree tops pointing to my younger self’s head. The warm colors in the foreground and the cool colors in the background adds depth to the image. All these decisions were made on the spot. This exercise for me was fun and gratifying. 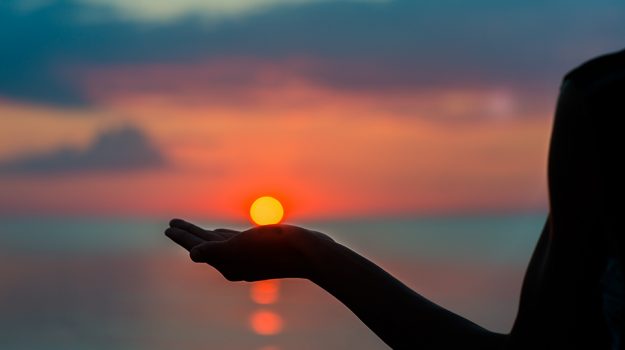 I am not a landscape or nature photographer as I feel my purpose is capturing the human spirit. Most of the time when I am shooting, I am pressed for time as the golden hour and darkness collide, leaving me little time to capture the emotions that make my images so enticing. This past week was no exception with back to back shoots  starting at 5 PM and ending as the sun set and the moon appeared. On our last night out east my son  and I were able to catch  the tail end of the most magnificent sunset with no subjects in front of us. As we sat together in solitude enjoying the moment, I noticed how my baby had become a young man right in front of me.  I realized that this was a moment I wanted to remember always as a mother but also as an artist. I grabbed my camera and asked my son how can we make this sunset more than just a pretty picture. He cupped his hand as the sun began to disappear into the horizon and with a bit of direction, Jake and I created this image.  A true mother-son collaboration. I find myself in the garden on most days looking to make images of flowers and like fruit they are there to be picked (photographed). This Spring a beautiful Sago Palm had just opened with a new batch of leaves/fronds and I was drawn to its “unfurling”. What drew me to this plant were the leaflets which resembled synchronized dancers all lined up, row after row. I feel that in this particular capture they seem to be reacting to or mesmerized by something they have encountered, almost holding their collective breath. Could it have been the previous post? My day started with rain and I was not happy with the light for the image I had in mind. I was looking for more directional light. The solution was to capture this indoor/outdoor image by making use of both the soft light filtered through the grey clouds for the background and a bare bulb from a reading lamp inside the house to draw the hand and coin. This is a perfect example of “available light”. To me “available light” means whatever is available at hand; sorry, no pun intended. I then converted it to B&W as the color version was not as strong graphically; the warmth of the hand and the green in the background became too important and the colors distracted from the message.  Once again I have approached this from a minimalist’s point of view keeping my composition uncluttered and using as few elements as possible. Once again I have been given a zinger to respond to. At first the bicycle was my hook But then found I was really attracted to the words in the background of the photo. I remembered I had just made a new addition to my series of surf shops. This one is in Ventura CA, and is small, and perfect to fit my idea of those old classic surf shops that are becoming a thing of the past. Hold on surf shops, I’m coming to document your existence. You are part of my youth, and I for one want to remember.
Posting....