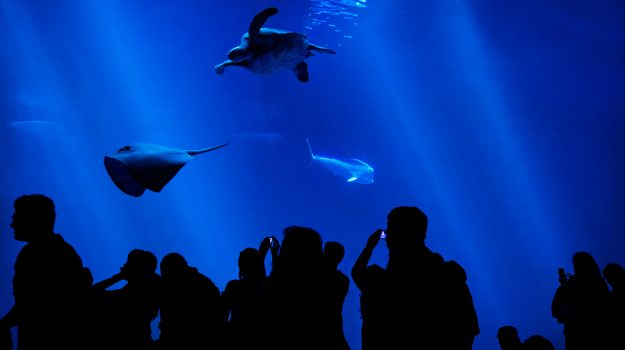 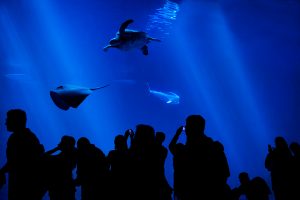 Monterey Bay Aquarium was the location where this image was created. The silhouetted people against the blue light of the water was very calming and I felt was possibly one of the reasons that no one was talking very loud, there was just muffled whispers. There were small spot lights in the ceiling, just enough light so people didn’t run into one another. The large room basically lit from the daylight coming in from the large glass. I sat for a while in the back of the room quietly waiting for the inhabitants on the dry side to thin out, as they meandered past the huge floor to ceiling framed window of thick clear glass. I found myself observing the observers. Watching for the characters on both sides of the glass to make an interesting relationship between the ones who lived in the water and the people. Waiting for a pleasing pattern, timing and patience were at play here, exposure the simple part. I framed as wide as possible, just cropping out the edges of the building on the right and the left, top crop just below the waterline and the bottom fell into place. Several captures were made but this one had all the players on the stage in their places. The silhouette was built in by the darkened room and the bright daylight filtering through the water which made for minimal processing. With the freedom of this Open Sea Exhibit  for the sea creatures, I wondered if they felt sorry for the people looking at them, that from their viewpoint appeared trapped in a cage of their own.