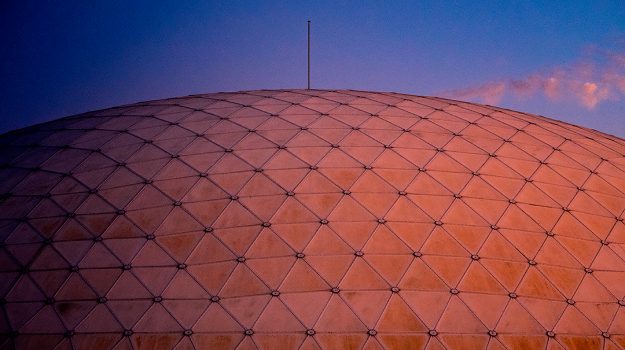 “Waiting for the Light” as it’s called, is a practice that takes patience and I’ve gotten a bit better at it in the last few decades. While I was focusing my attention on another subject, I noticed this curved shape with a unique pattern just over my right shoulder and thought that later in the day the light might fall where it would show some texture on the dome. I like what appeared as a small needle like object poking out of the top of the dome, the geometric pattern emphasized by the low light raking across the surface gives shape. The warm color of the dome contrasts against the coolness of the sky adding depth. Waiting for the small whimsical cloud to float just to the edge of the frame and not loose the quality of the light was only a slight risk because the wind was blowing fairly strong and the clouds were moving fast. My patience was rewarded and several captures were made at different lens lengths. Settling on a tighter crop was my final framing decision. During processing some saturation  and a bit of contrast were added to create the feeling of what I had previously envisioned on site. I felt like playing close-up with colors. Eye of a needle with some thread immediately came to mind. Contrasting colors, cool in the background and warm in the forground add depth, along with the out of focus backgroud pushes the needle and thread to the viewer. I like to work with clean simple design most of the time. Distilling things down to there simplest form. I won’t tell you how many times I had to thread this needle….but if you guessed it was more than once…you would be right.
Posting....