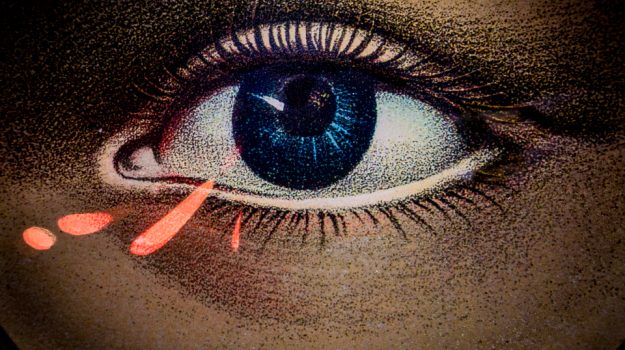 This is a close-up of a glass dish that I keep stuff from my pants pockets in, with reflections of lights in the dish. That’s all. The process started with my attraction to the eye image that’s in the dish as a possible subject for today’s submission and proceeded to my playing with the reflections that the curve of the dish picked up. At one point the dish caught reflections of orange LED lights that I had on last night, and they appeared to be in the shape of tears. The image was evocative enough for me to stop there. It’s just a photograph, and I simply look at it as a two dimensional image. I don’t care very much if the image is liked by anyone other than me. Cry me a river. I just enjoyed the play. Skulls. No shortage of them when talking about Dia de Muertos. Spanning three days from our Halloween on October 31st and lasting for two more days, this festival is celebrated in many Latin cultures, but in Mexico, it has special significance. During this time of year, the cemeteries are filled with replicas of skulls, or ‘calaveras’ in Spanish, and grave sites are decorated with Marigolds and  the favorite foods and beverages of the departed. It is a time of remembering the departed with joy, and not in sorrow. When I saw Blue’s image of a skull, I immediately went to the body of work I created while in Oaxaca for the Dia de Muertos celebration. The statue in my photograph marks the grave of a child. Any time one of the “los angelitos” or “little angels” passes on, the head stone is similar to the one pictured here. The cool green caste of my image is a stark contrast to the fiery red of Blue’s rendition. The Game Abides. The ability to shift gears or change your plans when shooting often happens when working with babies. An adorable baby who only cried for a short while. I thought of this image in response to Eliot’s Sex and Drugs. (No babies were hurt in the taking of this image.) I got only one frame before he scampered off the set. What’s a Valentine without a rose. Roses and hearts go together like peanut butter and jelly. I am setting a new direction, away from hearts and flowers to disturbing things that lie in the depth of relationship. The dark side of love. I love you, I’ll kill you. The Enigma song, the enigma of love.
Posting....