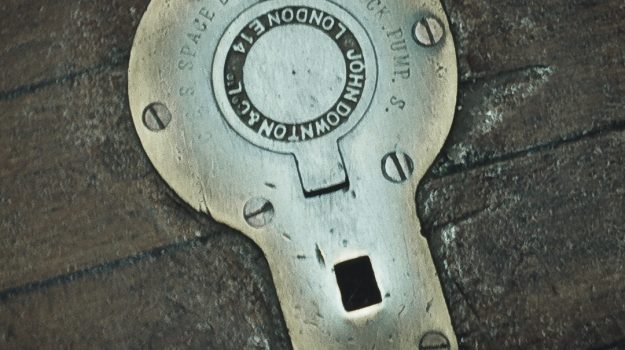 I noticed this on the deck on one of the Star Ferries that cross Hong Kong’s harbor, but never did figure out what it was for. It appears the original brass, typical of nautical hardware,  very worn down to the steel, plus it is appears to be original from when the boat was built in the 1950’s. With all that foot traffic, there is no opportunity to corrode from sea air. If it had eyes and ears, what stories could it tell. The patina at the end of the rocking chair arm in Blue’s image called me. The multiple coats of paint revealed over the years by the ‘wear and tear’ spoke to me as if the chair had it’s own voice and language. “Wabi Sabi” is one of the most traditional features of ancient Japanese culture, centered on the acceptance of both transience and imperfection. The aesthetic is sometimes described as beauty which is “imperfect, impermanent and incomplete”. In art books, it is typically defined as “flawed beauty”. I went for a treasure hunt of sorts, sorting through my belongings looking for examples and found 3 elements which I combined in this still life. The background is a stone table which lives on my balcony exposed to weather and on which sits a large statue of Buddah. On it sits a  brass cup I have used to contain water in various Feng Shui applications. And the key? It has been in the lock of a filing cabinet which has remained next to my desk for many years. I had never removed it, but was attracted to the corrosion and ‘aging’ which it’s surface presented. Little did I know, the part of the key which had been in the lock all these years had been spared the affects of proximity to the ocean and had a clean silver finish just as it had from it’s creation. 3 objects, 3 materials, 3 voices. If we are very still, we can hear them talking, telling us their stories like the arm of Blue’s rocking chair.
Posting....