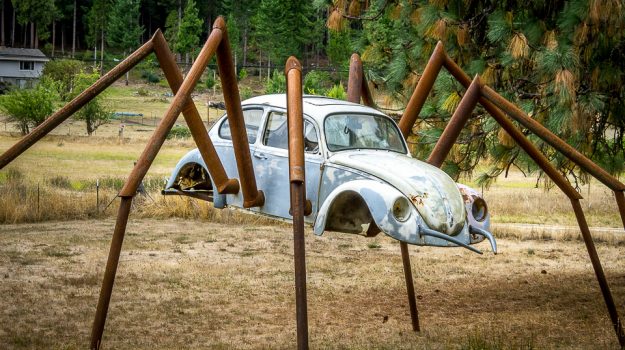 Who’da thunk! Clearly someone has too much time on their hands. Never the less, I am grateful for someone else’s sense of irony and humor in manufacturing this subject.

I often give pause when photographing someone else’s creation, whether artful or environmental, and consider whether or not I am borrowing too much from their work in making it my own through a photograph. The line is often vague, though in this outdoor display, the creator is very much interested in publicly showcasing his creations off the side of a public road.

I caution my students about copying someone else’s work too literally, it is all to easy to shoot a work of art and display it as “my art” in a photograph, this is an illusion. My image of this subject has the work of a VW industrial designer, the current owner’s chop-job that transforms the car into a ficticious bug, fold in the advertising agency that labeled it a Beetle in the first place and you have multiple layers of creation, not to mention the documentary nature of the photograph itself.

Where is the line between creative interpretation, observation and plagiarism? Its not something most people think of, but we as artists should be mindful of our borrowing and realize that we all stand on the shoulders of giants.

I just wouldn’t want this particular beetle to land on my shoulder!