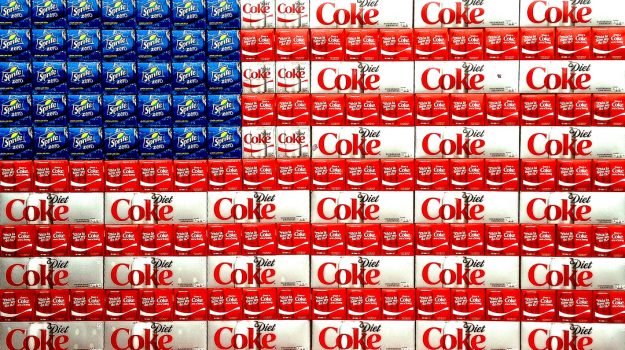 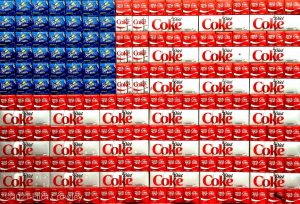 Walking into a grocery store I saw this set up shaped like an American Flag. I just had to shoot it, with my iPhone. Lots of adjustments in Lightroom, especially straightening all the lines so it truly looked square. 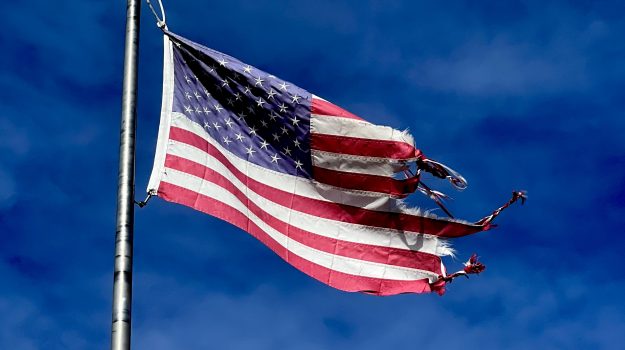 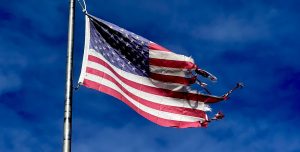 I’m taking creative license with the “ground rules” for our DPG project. Typically there should be a visual connection between images. I am choosing a narrative connection instead.

Our so called United States is not so united these days, most notably on the heals of the attempted 2021 Insurrection. This image, shot yesterday, personifies the torn nature of our republic. The fabric of our society is being ripped apart by demigods, misinformation, and the absense of critical thinking; pitting American against American.

This uncivil behavior saddens me as it subverts thousands of years of science and knowledge that has built our civilization to date, all in the name of misguided belief and ill-defined “liberty”.

On the subject of flags, the Republican party’s co-opting of the American flag as their private brand is repulsive to me. I have never seen the flag treated so flippantly and poorly. We don’t have to look too far back in history to see the hazards of Nationalism run amuck.

I feel that this photograph is a fitting follow to Jeremy’s image of the Oklahoma City Memorial, another instance of how the social core of America has been torn and tattered by American ignorance, fallacious beliefs and violence. 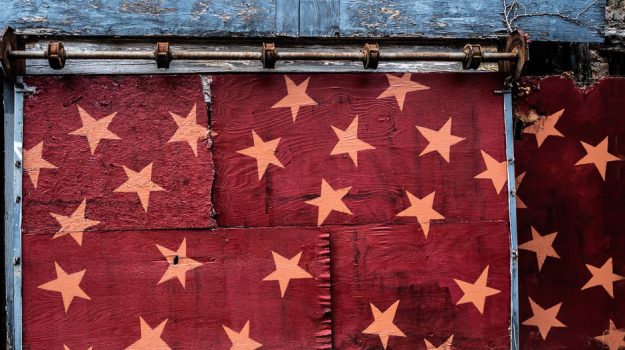 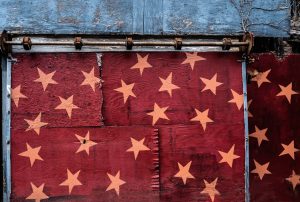 Old Town Mall – once a busy outdoor shopping mall for city pedestrians – has been abandoned for several decades now. The buildings and shop signs are deteriorating under the elements and they never fail to yield wistful photos, the fallen fruit for me to find today. This boarded up storefront looks to me like a form of American flag, a symbol of a floundering but still hopeful America. 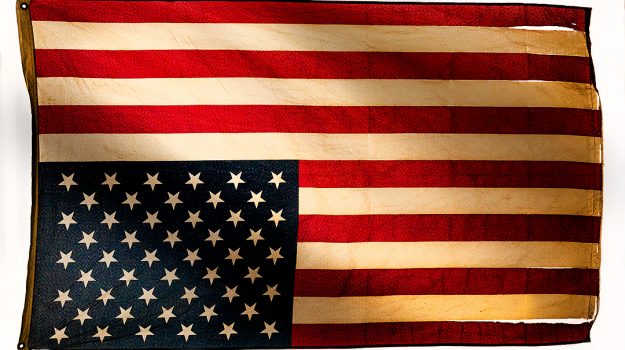 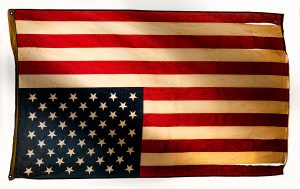 The American flag hanging upside down is a signal of dire distress, a signal of extreme danger to life or property. This image is a visual representation of how a lot of our country is feeling right now. A bit worse for wear with tensions running high, internal strife and competing factions. With a 24/7 news cycle, showing huge groups of citizens protesting, some rioting and looting, hurting each other. People are gripped with fear and frustration, feeling just as this flag looks, stained and coming apart at the seams, distressed. At this point in time I believe we are a nation in distress, left with more unanswered questions than answers, more opinions than solutions. 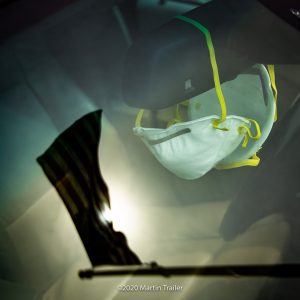 While we are all sheltering in place, I got out long enough to make a shot today.  With the situation we are all living under, I grabbed a couple of N95 masks I have and use when sanding and headed out. Thinking about two, the thought of fuzzy dice hanging off the rearview mirror and common years ago, and not legal any more.  I wanted something more to the shot, so I ended up visiting my Dad at the cemetery to include an American Flag. While there, I couldn’t help imagine what he would have thought about the current circumstances. We are all in this together.  Stay safe and healthy!

All Hat, No Cattle 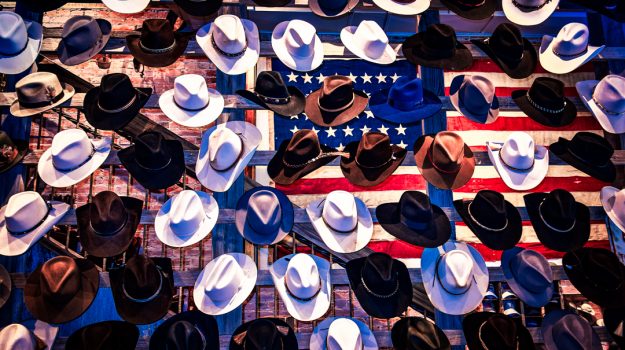 Walking around Aspen Colorado I spotted a store that specialized in

cowboy hats, expensive cowboy hats. I was captured by the repetition of the classic shape and randomness of placement and color. With an assist of a little on camera flash I exploited the flattening effect of photography by including the background of the flag. It looks like the hats are flying across the scene but in reality they are all on hooks. 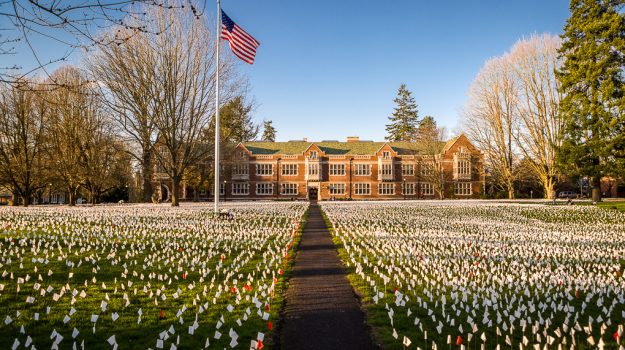 I often query my students about whether there is “bias” in documentary photography, surprisingly, quite a few of them thought that there would be no bias, as though a photographer could become a Xerox machine. Of course, as any veteran photographer will tell you, there is no such thing as a unbiased photograph. As soon as an artist begins to frame a scene, there is bias, human choices are made, moments are captured.

This scene was photographed at Reed College in Portland Oregon. 112,000 white flags were installed to honor the lives of dead civilians and soldiers killed in Irag during the second Gulf war. This was a student political protest against the war. One of the signs posted at the site stated “655,000 Iraqis have died. Each of the 112,000 white flags represent 6 Iraqi soldiers and civilians who have died in the War in Iraq”.

I must say the scene was emotional, every flag representing 6 dead human beings. The American flag, luffing in the breeze, points down toward a sea of smaller cousins below, as though there was some kind of conversation between our flag and that of the lost Iraqi souls. I would like to think this conversation would be an apology.

I framed this symmetrical composition on a beautiful day, but I am afraid the pretty light belies the solemn nature of the political statement. A conscious choice was made to patiently wait for the flag to lift in the breeze and to be captured by the waiting photographer. 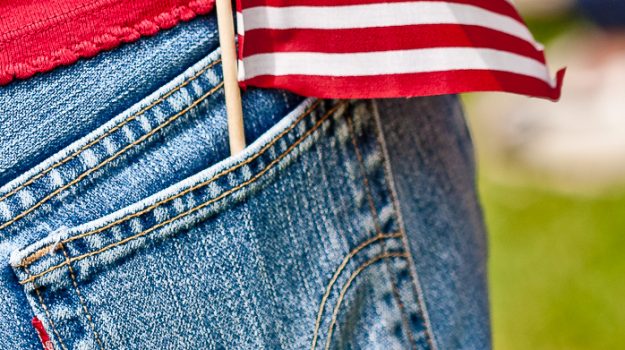 The devil is in the details has been said. These details are filled with visual clues. An American Flag in the back pocket of a female American. How do we know these things? Because of the symbolism in the image. Notice the Levi’s giveaway tag on the pocket, even though it can’t be read we know what it is and what it says. That screams American. The texture and hem of the red top says it is a female. The viewer can assume the green is suggesting grass and the out of focus area it appears as though other people or stuff is on the grass. A party perhaps? What is the narrative that can be conjured from this? The easy story is Fourth of July, and perhaps the flag is in her back pocket because her hands are full with a hot dog, adding to the July celebration. Or maybe, it is Memorial Day and she is placing flags on headstones and this is the last one in her supply. Maybe it is Flag Day and her patriotism is in her pocket. There could be a bunch of possibilities. But one thing is for sure, she is as American as apple pie and baseball.   This clearly speaks to an American audience. Would it have the same impact or story telling ability in other places in the world today? Chances are no. This symbolism is particular. As a photographer, we have to understand who the audience might be, so when we include “clues” they can be understood. 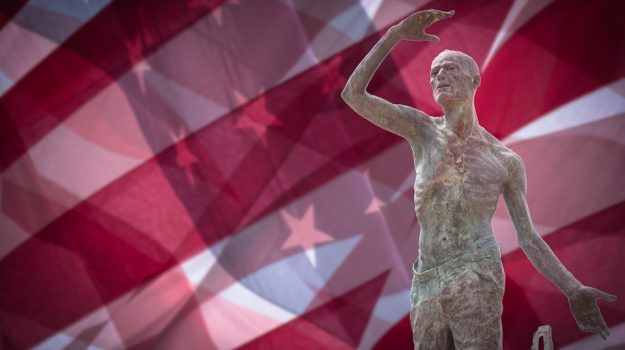 Photography as an art has multiple paths when creating an image.   This is a layered image using an American flag as the primary element.  Layering the flag with multiple shots conveyed the idea of the flag and separated it from the more typical straight flag image.  The statue, a tribute to POWS adds the final touch for the viewer giving relevance to the overall composition.  The viewers eye is first caught with the red color and moves to the statue bring it all together. I originally had another path for my shot today, once I started shooting photographs my conscious or unconscious took me on another path.